You are here: Home / Windows 10 / How do I fix Windows 10 Restart Problem – 5 Causes and Solutions

Computer keeps restarting in Windows 10 because of software or hardware issues.

This problem was there in 1809 version also. It can be a hardware issue like bad RAM, faulty hard-disk, corrupted registry, drivers not updated, incompatibility of graphic drivers.

Keep your drivers up-to-date. Only install reliable apps and services. Check your hardware for faults. The recent 2004 update of Windows 10 has also caused restarts in Windows 10 laptops and computers. 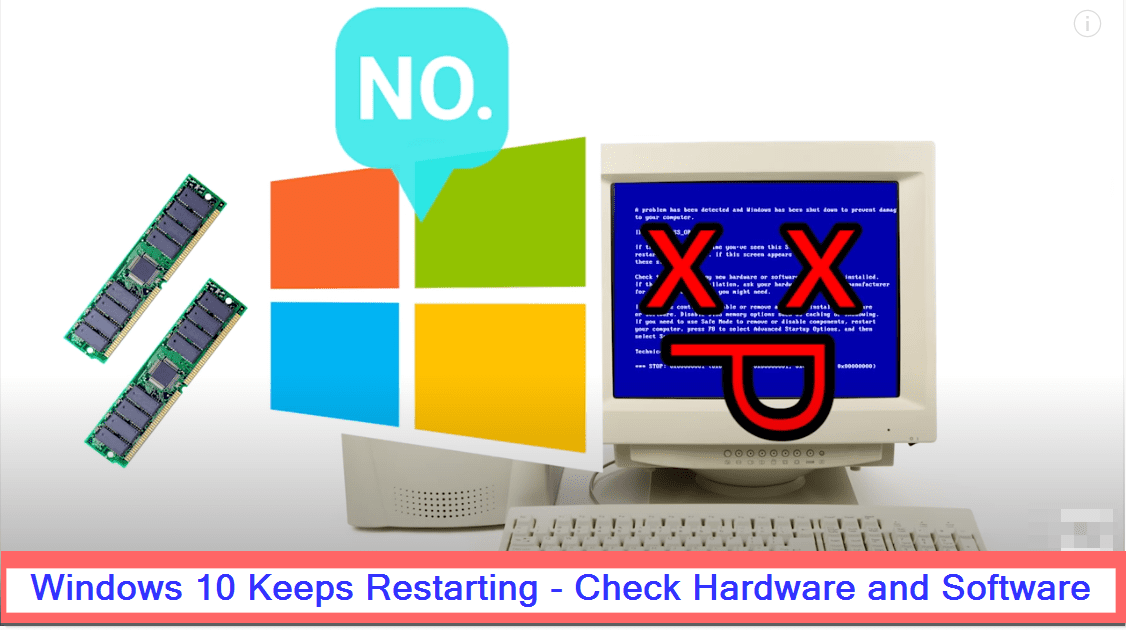 Safe mode is another way to check the cause of restart problem.

Computer restarts automatically after sleep, shutdown, on startup, after reset, while installing, after update and many others.

The cause for each problem can be different. It is common for Windows 10 restart after update or installation. This will happen couple of times. It should stop after the complete process is over.

Instead if it keeps coming back without any particular reason, then you need to take action. Initially you will not understand why it is happening. But when the correct fix is applied it will stop.

In this post, we are going to see multiple issues and fixes for pc keeps restarting problem.

This solution will even work in the latest May update of 1903 version. 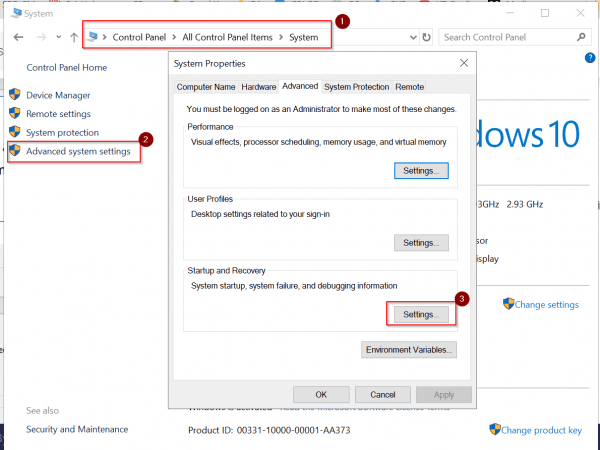 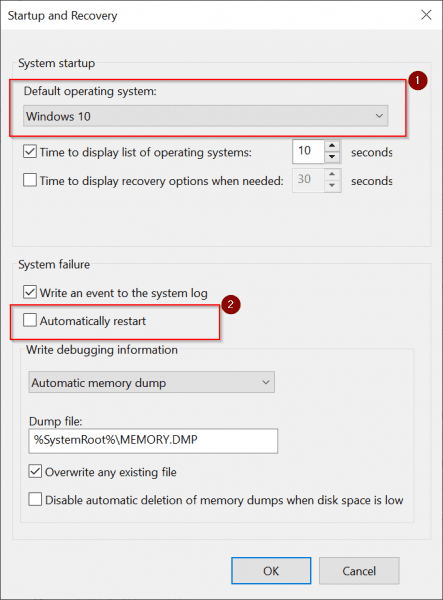 Sometimes your Windows 10 laptop restarts after sleep. For example, with this laptop – HP Spectre x360. Generally, this can happen after PC goes to hibernate and instead of waking, it will just restart. You can also have problems with G6-1c43nr kind of HP laptops.

Also Read – How to Permanently Disable Microsoft Defender in Windows 10

The solution for this issue, is adjusting your “Advanced Power Settings”. In Windows 10 and new OS, by default, “Allow Hybrid Sleep” and “Hibernate” are turned on.

So your computer goes into this mode after a few minutes (the time is set in the Power Settings). You also have the option of “Turn off Hard Disk after” a set time.

Generally, this configuration is required for saving power. But this can be a cause for PC restarting issues.

So you just have to turn these Setting to “Never”.

This may keep your system hard-disk and CPU running for ever, but manually you can turn on Hibernate and Sleep, which is a fix for this kind of problem.

For G6 kind of laptops, it is the problem with new BIOS.

Generally, you have F.48 or F.49 versions of BIOS. But reverting back to F.46 can fix the restart issue. You can see the above article for solution. 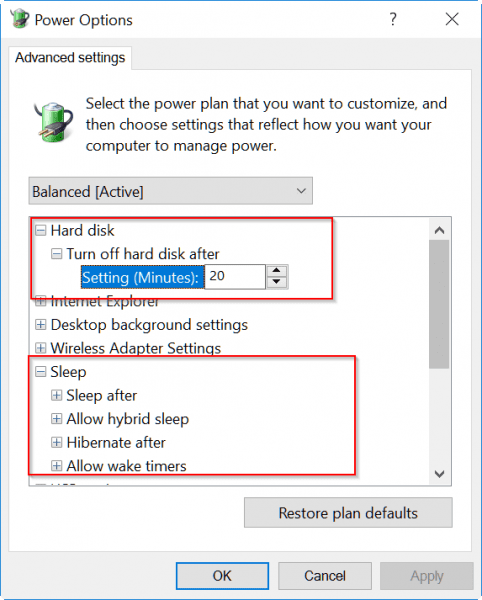 This is a cumulative update and for some users Windows 10 was going into a continuous loop of reboot, when they try to install this update.

This KB3081424 update gets installed automatically if you have your “Windows 10 Update” settings to be automatic.

The cause of the problem, is due to a bad entry written by the update in the Registry.

After failing to install for the first time, the Registry prevents further tries to reinstall the update correctly. 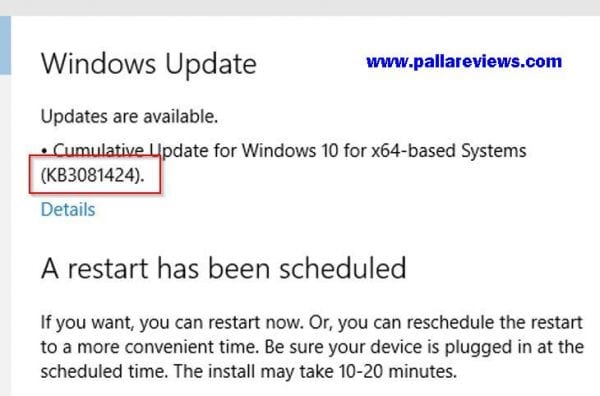 The solution to this problem earlier, was deleting some keys related to this Update in the Registry. This was little tedious, because the first problem was that, you will be unable to login to your Windows 10 system when this problem occurs. Though you can try hard-booting and going through Safe Mode, still some users faced struggles through this form of solution.

So finally, Microsoft released a fix for this problem, via the KB 3081436 update. . But Forbes reports that, some users are still stuck in an endless reboot loop, even after applying this fix.

In that case, there is another solution as explained by http://www.theinquirer.net/inquirer/news/2421595/windows-10-cluster-update-puts-some-users-into-a-reboot-loop.

If the update does not seem to work for you, Microsoft suggests opening the Control Panel, clicking on ‘View installed updates’, selecting ‘KB3081436’, clicking uninstall in the toolbar and restarting the computer.

You can also read the comments on this article, related to the solution of this problem.

In July 2016, some users reported on http://www.tomshardware.com/forum/id-2995352/windows-restarts-warnings-errors-updates.html regarding Windows 10 restarting without warning, errors or updates. The system configuration reported is Z170X-Gaming 5 with an i7-6700k.

The problem looks somewhat temporary and does not happen continuously. First of all, you have to check your Windows 10 Update Settings, whether you have your PC to automatically restart after an update. If that is the case, disable this feature.

But the problem is that Windows 10 tries to reset this setting, every time it installs a major build version like 1511 or 1607. Also some minor updates also do this as well.

You can also try to remove the dust gathered in the PSU, CPU heatsink and other parts of the motherboard. This is to see, if you have any hardware issue, instead of a software problem.

But most likely this issue looks temporary, which may be due to “unexplainable” features of Windows 10.

Some laptops can have restart or reboot issues during installation or setup. Generally, Windows 10 PC will re-boot 2 to 4 times, to complete installation. But instead of showing progress, if it re-starts several times like after 60% or 70% and forever, then there is an issue. There is also an issue with laptops and desktops which are like 5 and above years old. So you should also think of upgrading your hardware.

There are several solutions in this case, if Windows 10 keeps restarting during installation. The following steps can be performed as mentioned in the original article.

Now, connect to the power source and keep dis-connected from the Internet.

Two things may happen. Either your Windows installation will roll-back to the previous version like Windows 8.1 or 7 or will complete the installation.

If set-up completes and you can see the Windows 10 desktop screen and other functions, you can continue to connect to Internet and proceed for normal use.

If it roll-backs to old version, then you can try upgrading manually using the Media Creation Tool or ISO file.

If you feel that your Windows 10 PC is restarting instead of shut-down, you can try the following registry changes mentioned in the above YouTube video. This fix is like in Sep 2015, but it shows some changes to the registry keys, which will make your Windows 10 computer function again.

The above YouTube video is a solution for Windows 10 keep restarting instead of shutdown. The video has like 15k views on YouTube and is uploaded by “Iviewgle” channel.

The above YouTube video is another solution for Windows 10 restart problems. Sometimes, there may be “system file corruption” or “hardware failure” due to which your Windows 10 will go into never-ending loop. In that case, you can take the Windows 10 installation DVD or flash-disk and boot from it. Then you are given some options, which you try to resolve your problem. See the above steps, on how to do it.