How to make Windows 10 boot faster?  As a major fix, you can disable the “SysMain” and “Windows Search” services as a first weapon. Startup items, old hardware, and services can also be the cause of slow boot. Simple tweaks like disabling some services and changing to SSD can solve the issue.

There are other performance problems after the 2004 update. Your hard-drive can constantly sit at 100% usage making your laptop slow and unusable. Even a re-install cannot solve the problem as there can be a bad memory leak.

Another important change you can make is to replace your old HDD drives with SSD. In 2020, solid-state-drives are fast replacing the traditional platter drives. These boost performance and also improve boot time.

Your Windows 10 can be very slow and unresponsive in 2020. A black screen can appear when you restart after an update.

If you find that your Windows 10 slow after June update 2020, then it can be cause of one of the latest KB updates after 2004 update. Then you can uninstall that particular KB update to check if it solves the problem.

Internet slow after Windows 10 update 2019 can be the cause of network drivers or related issues. You can reset the network adapter or troubleshoot using Windows tools.

Windows 10 slow after update 1903 can be another cause for the latest issue. You might not have observed till now and this could add to your vows in 2020. 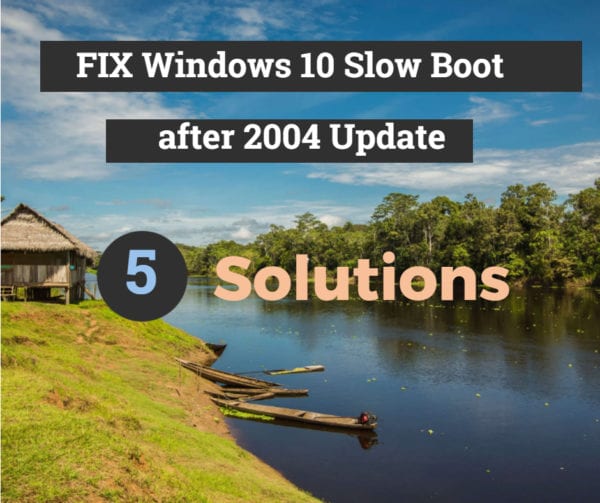 Luckily for me, I didn’t face any problems with my current configuration. The following are my specs.

My system boots in less than 45 secs. This can be attributed to the usage of SSD drive, which has improved by boot performance.

The exact reason is not yet known for boot issues after the 2004 update. To solve Windows 10 slow after update 2020, you can try some of these troubleshooting steps. 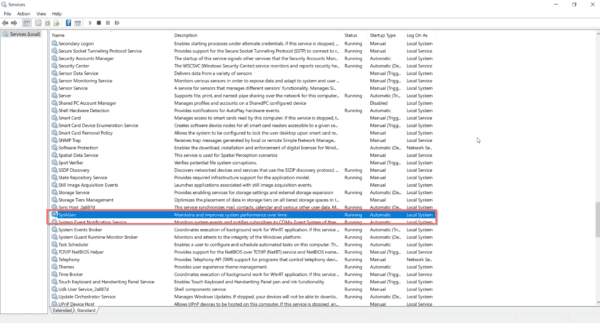 In the earlier versions of Windows 10, “SysMain” service was also named as SuperFetch. As of the 1809 update, this is renamed as “SysMain”. If you check its description, it says the following –

In the initial period it consumed a lot of memory and CPU resources. But this is designed to maximize memory and keep your system running smoothly even under high usage of applications, apps and processes.

SysMain sits quietly in the background and analyzes your RAM and most often used apps, applications and services. It marks these apps as “frequently used” and loads them into RAM more quickly, boosting the system performance.

Similarly, Indexing service is also related to “Windows Search” service. As we know when we add new drives, folders, files to index locations, the performance of the computer slows down a little. This is to make the “Search” functionality of Windows 10 more quick.

This generally happens where the hardware configuration of RAM, CPU and hard-disk are of legacy type.

Even after disabling both these services, your computer still doesn’t boot quickly then move to the next solution.

As of 2020, solid-state drive prices have become a lot cheaper. For $50, you can get a 250GB SSD drive. Though it may be insufficient to store your photos, video, office documents, it is useful to install your Windows 10 OS.

Most motherboards support both SATA drives and SSD. You can use your old HDD for storage and SSD for system performance.

For quicker access to boot files, you can create your OS partition on SSD. This will reduce the time required to boot up your Windows 10 computer.

You can check this case-study on how I was able to reduce Windows 10 boot time using SSD.

In another forum post, an user purchased HP Probook 450 G7 i5. The system boots up very slowly and gets stuck at the HP logo for 2 minutes. It has the latest configuration of Intel Core i5 processor with 8GB RAM and also an SSD.

The latest 2004 update is installed on Windows 10 64 bit version. All the drivers were updated along with the BIOS. For this type of problem, the user has enabled Fast mode in BIOS for quicker boot.

Related :  8 Ways to Fix Control Panel not Responding in Windows 10

Then the slow boot problem is resolved. It takes only 10 to 15 seconds when Fast mode is enabled. Depending upon your BIOS configuration, you need to enable this each time which may be a time consuming process.

As we know, audio technology installs different drivers and services. Nahimic audio software is an HD audio technology which improves audio and voice performance of your gaming system. In one case it was found that Nahimic service was the reason for slow booting after the 2004 update.

Just like Realtek, VIA, Nvidia, this audio also installs a service in Windows 10. Both ASUS and MSI use its drives for enhancing headphones. So if you are using an ASUS motherboard or laptop, it is better to check its services.

If you find that your laptop is booting slow after the update, you can disable the Nahimic service. Then restart and check the boot time. If it goes well, you can keep it disabled till the issue is resolved. Until then you can use the generic drivers provided by Microsoft or supported audio codec drivers by your motherboard manufacturer.

Your system comes with different hardware like headphones, speakers, webcam, printers, disk drives, motherboard, CD/DVD drives, keyboards, monitors, network adapters and many others. Some of them are ready to install and plug-n-play.

You can open Device Manager from Control Panel or Windows 10 search. Then check if there are any yellow exclamation marks beside any devices. Also some devices are not properly installed.

These make use of generic drivers of Microsoft and do not cause much issue. But some legacy devices like old webcam, bluetooth devices require their own drivers given by its manufacturer. Sometimes these are not updated by third-party vendors to be compatible with Windows 10 2004 update.

In such cases, use a driver that worked most recently. You can also rollback to previous drivers, if the latest drivers are not working. This happens mostly with graphic and audio drivers and services.

You can also type services.msc in the Run dialog box to open the Services window. By default, several services run with Windows 10. But if you find any services unrelated to Windows 10, you can temporarily disable them.

Then check your boot time and find the culprit that is causing the issue. You can disable it, till a fix is released by the manufacturer or Microsoft. You can also try clean boot to check if any service is the issue.

Related :  Fix: Bluetooth Not working in Windows 10 after 21H1 Update

Sometimes a lot of startup items are installed when an app or program gets installed. If you are using a 2GB RAM and an old HDD, this could severely impact boot performance.

The best method is to disable all these startup items and check your boot time. If it gets reduced, then you can enable each one of them again one by one. If the startup item is the culprit of slow boot, then you can disable that particular startup app or application.

If you check your Task Scheduler then a lot of tasks are initiated at the startup. This includes Google and Adobe update task programs. When you restart your computer daily, these also may startup daily or weekly based on the setup.

In such cases, you can delete these tasks if they are not required. This will improve your boot speed and also performance.

This YouTube video talks in general on how to rectify slow boot issues in Windows 10. It applies to 2004 update also. There are lot of tweaks and tips that can be applied to all updates.

Windows 10 slow after update 1909 indicates you need to change your hardware. Since this is an old update which was released in October 2019, you should be good to go.

If you find that your system booted normally before and had problems only after the recent 2004 update, then you can roll back to your old version.

Computer slow after Windows update 2020 is an indication that you have a bad driver or old HDD.

For me, I still have my SysMain and Indexing services still running.  Disabling them caused blue screen error, so restored the previous settings. It all depends on your current system configuration.

If disabling these services improves your boot time, then keep it like that. Otherwise, go back to your old settings.