Solid State Drive (SSD) is a new type of storage device for computers and laptops.

The advantage of SSD over HDD is that it has no moving parts. No electricity is required to store information.

With good hardware configuration, you can boot up your laptop or PC in less than 10 secs. SSDs also have an advantage in gaming.

The speed of data-transfer plays a key role in smooth gaming experience.

Less sound is another beautiful feature of SSDs. HDDs can make sound due to their moving parts.

But because of SSDs built-up mechanism, they are less noisy.

In this post we are going to see the list of best ssd of 2020 based on user reviews , performance, benchmarks, warranty period, price etc.

What is SSD – Introduction

An SSD does the same operations as a HDD.

But data is stored on interlinked flash memory chips.

This keeps the data without power being present.

But a typical HDD data can be read only if a power source is attached.

The SSD chips can either be permanently installed on PC motherboard (desktops and small laptops), on a PCIe (external card like a network card) or in a box that’s soldered to a slot in a laptop or PC.

The HP ssd S700 is the new compared to Kingston A400. Both were released in 2017. The avg. sequential read speed and write speeds in HP S700 were about 40 MB/s more than Kingston ssd. The peak 4K random mixed I/O speed is the only metric that Kingston scores best.

HP S700 vs Kingston A400 - Comparison of Benchmarks

In all the average and peak metrics, HP S700 has a better edge.

Another feature to compare is the price difference.

Pros of Kingston A400

Cons of Kingston A400

The following is the list of top 5 best ssd of 2020 based on no special order of ranking. 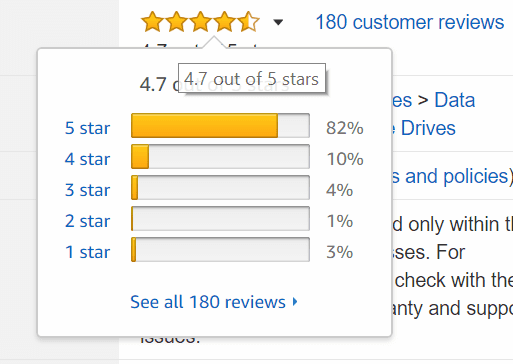 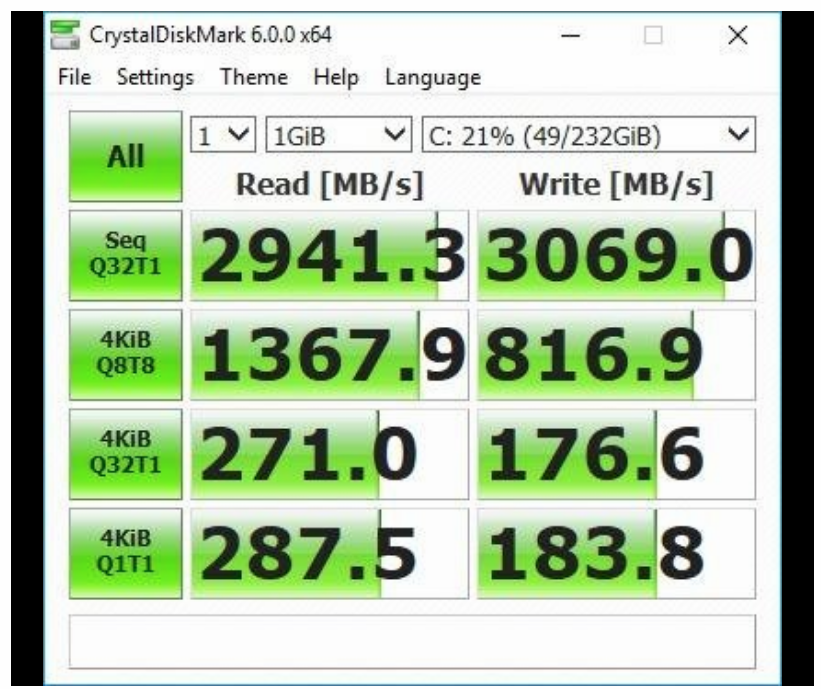 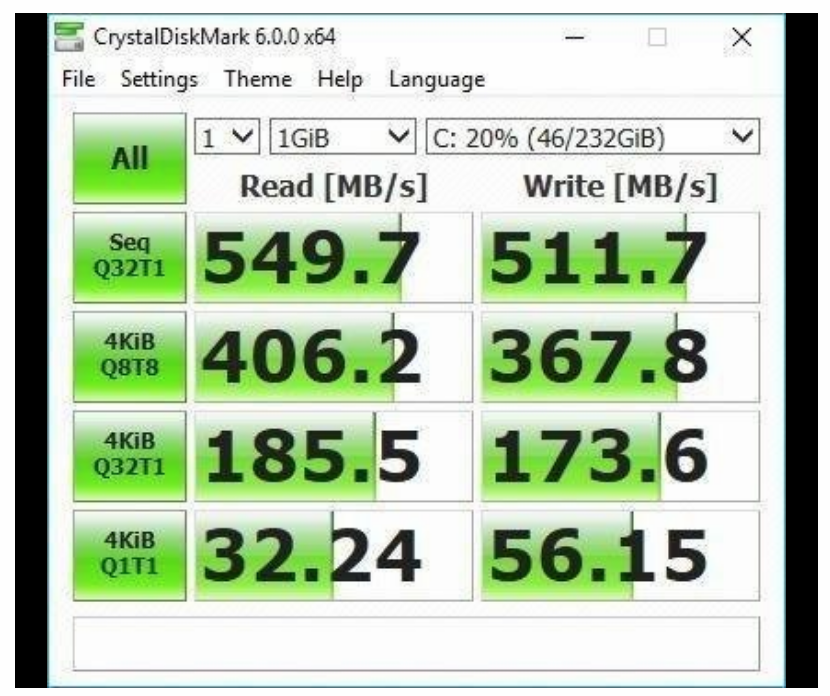 One can also get the Corsair Dual SSD Mounting Bracket for another $6.

You can use the Samsung Data Migration Software and Samsung Magician Software for installing the SSD and replace the C: drive.

After formatting SSD in NTFS format, you can clone 232GB to SSD in around 30min with a SATA 3.0 to SATA 3.0 connection.

If your PC motherboard supports SATA 6.0 it would be much faster.

Users reported that there were no issues after cloning when the same port was used as the C drive HDD was connected. 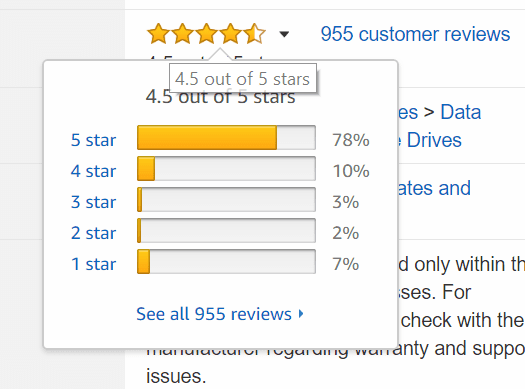 Customer reviews of SanDisk SSD PLUS on Amazon.com

Crucial limited 5 year warranty is given.

So generally an SSD is likely to live life more than you use it and the warranty it supplies. 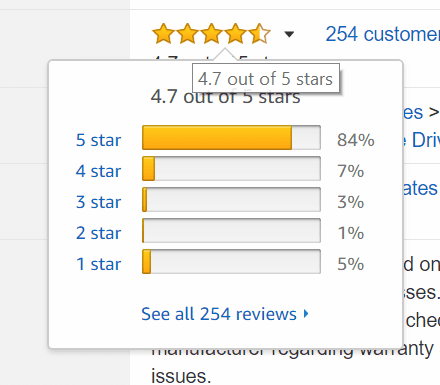 Every purchase of MX500 comes with a 7mm to 9.5mm spacer or adapter. The advantage with this type of SSD are –

But the cloning process may require extra equipment like SATA to USB for one time. 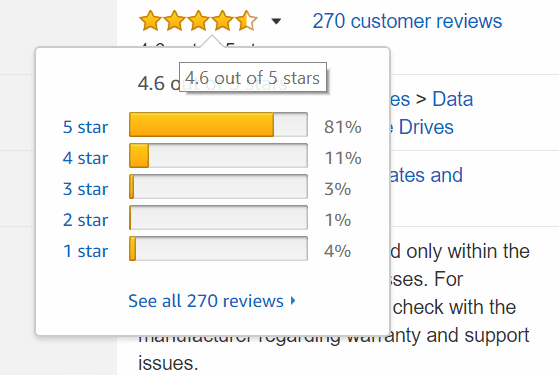 If you have Bitlocker enabled on your files, it is better to disable them as Acronis doesn’t support cloning those files.

Since that tool is to encrypt files, you may have problems later of not accessing them.

So before you clone, it is better to decrypt and then copy it. CrystalDiskMark test pegs the sequential reads as 568.8, and writes of 557.3.

You may also require an SATA III cable and a 2.5” to 3.5” adapter bracket to fit in the desktop bay since they are not provided with the purchase.

You can install Windows 10 and should work without problems.

One user had a 5+ year old desktop with Win 10 booting up in 3 minutes.

After running this SSD, it took only 15 seconds to start.

With the Windows Experience index on Win 7, the score came out to be 7.5 for a particular configuration.

The temperature also does not exceed 42c at maximum load and does not make much noise.

You can transfer a 100GB steam library to SSD under 10 minutes.

Games run faster and even better.

This will work with any desktop or laptop having a SATA drive port.

In case if the SSD is not recognized after hooking up and rebooting , the solution is to run Windows Memory Diagnostic tool.

Within 5 to 10 minutes your drive will be found again.

If your PC does not boot up on removing the old HDD, then you need to change from Legacy to UEFI boot mode, if you have partitioned them using GPT.

Customer reviews of Kingston A400 on Amazon.com

It works with Windows 10 64 OS and boots very quickly.

You can also rapidly load games and programs.

You can use a 1 TB or 2 TB HDD storage as secondary storage.

Even if you have SATA 2.0, this upgrade will have a huge performance difference in load time and quality of gaming.

One can use MiniTool Partition Wizard free version to migrate OS to SSD. Typical CrystalDiskMark 5.2.1 x64 benchmark tests of Kingston A400

Your data is much safer compared to the mechanical drive.

Also if you are using old Intel processors with SATA 2.0, one may not find the practical speed that can be found with high-end machines.

But at least if you are using i3, i5, i7 of 3rd to 7th generation, you can definitely see 10 times faster performance according to the WD benchmarks.

The following is the list of top ssd in uk.

These are mentioned by popular tech sites.

The following is a graphic of SSDs performance in different benchmark tests.

The score given is the overall performance score calculated over an aggregate of ten benchmark tests. 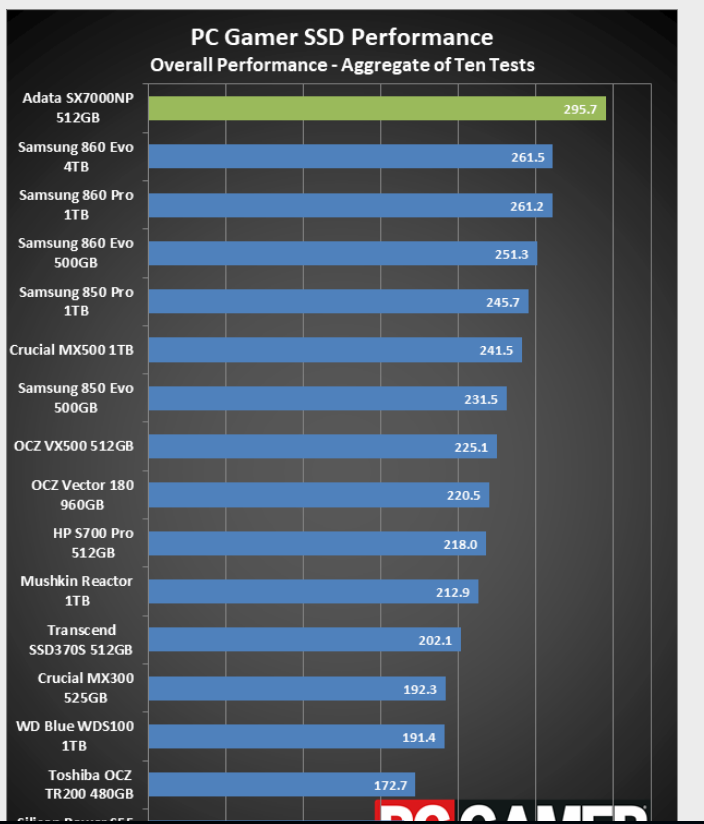 Image Credit: PCGamer reference given at the end.

Related :  How to Fix HDMI over Ethernet Problems? General and Common Solutions

As you can see above, Adata SX7000NP with storage capacity of 512GB is the top best ssd in performance.

Samsung has a good score for different models of ssds. The 860 Evo, 860 Pro, 850 Pro are giving good scores in ssd benchmark tests.

Pros and Cons of SSD

Recommendations of SSD in 2020 by popular tech sites

There are also some disadvantages with SSD’s.

But in the recent SSDs this amount has increased vastly. So the life span is sufficient, before we discard them.

This is due to the mechanism of how SSD works.

Each time NAND writes a singly byte of information, it has to erase large block of data.

For some ssds, charge is left in the floating-gate transistor which changes it resistance.

So finally after some time the gate or block where information is stored becomes useless to be written and change into a “read-only” state.

Also the capacity of SSD drives are commonly around 500GB to 1TB while that of HDD is between 2 TB to 10 TB for the same price. 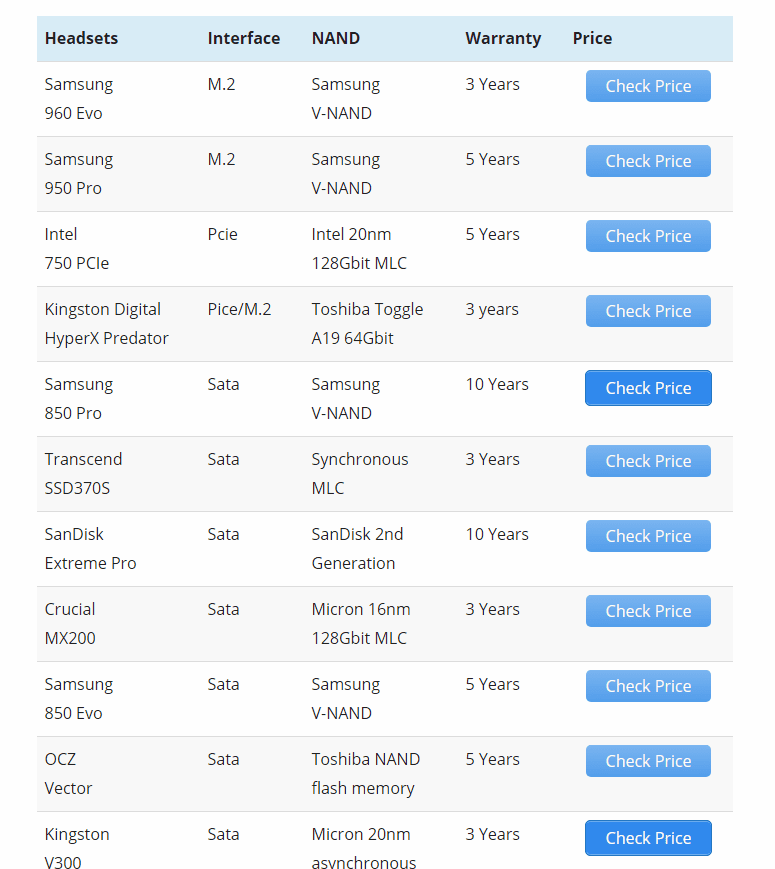