If you see error code 0x8007025d in the middle of installation process, you want throw your PC out of the window. You get a message that windows cannot install required files in Windows 10 or 8.1 or 7. Many software or hardware install errors like the above.

They generally crop up after a period of time. It is also necessary that others identify you in your work network. To install Skype kind of programs it is mandatory that your OS installation runs smooth.

The easy fix to 0x8007025d is to find the right installation media for Windows 7 or 8.1 or 10. If you are still using Win 7, then get a genuine OS DISK. As for Win 10, the latest release of 1809 update is already available at Microsoft site.  The link is mentioned below.

Using Rufus utility to install Win 7 or 8.1 or 10 from USB disk. It works nicely. Sometimes USB 3.0 is not supported by your motherboard, then you have to plug in to a USB 2.0 port. If that fails, burn the ISO file on to a DVD and start the boot process from it. 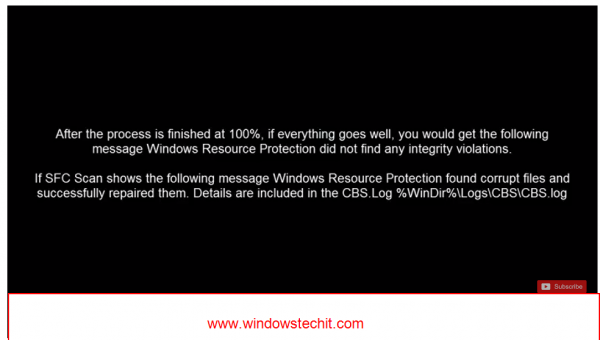 As you can see above, this windows 10 error code 0x8007025d also occurs while doing a system restore. For this kind of problem, different from installation issue, you can do a SFC scan of the partition on which your Win 7 or 8.1 or 10 resides. The below command can be executed on an elevated command prompt.

It can look awkward if you are doing something important.

You might have formatted your hard-disk or SSD completely and trying to do a clean install. Still you face this dreaded error code 0x8007025d.

I actually upgraded to the Windows 10 1709 version and signed up for the Insider Preview Builds – Fast Ring updates. Then all my troubles started. As you know since these are in still beta version, you have some bugs and they can crash apps or hang your system. I also felt that Systems panel was becoming slow with each new Build version. 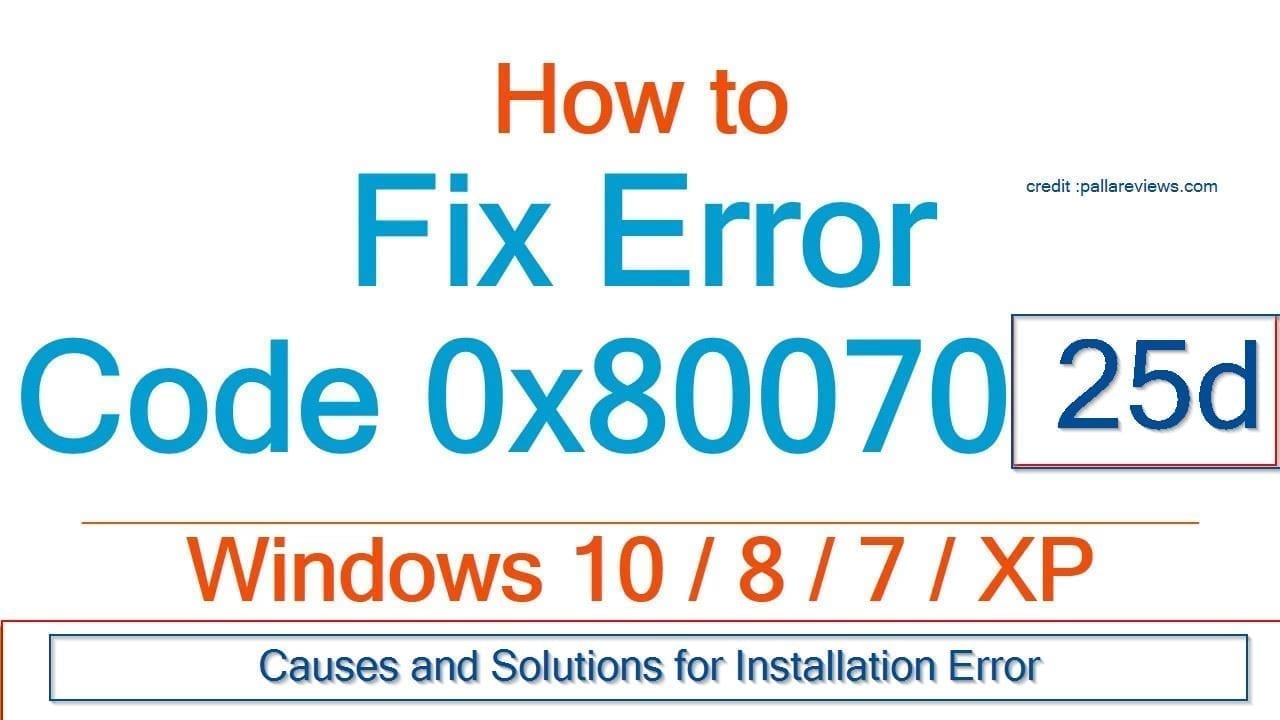 So I thought of formatting that partition and do a clean install.

Before I tell how I solved this confusing error code 0x8007025d, let’s see some of the causes.

I searched through Microsoft forums and I find that this error started in 2015 and still continues in 2017.

For example, a user with Lenovo G500 was trying to do clean install from a corrupted Windows 8.1 to Windows 10. He formatted the system and created new partitions and still getting the error.

So I suggest he check his RAM by performing memory test errors to see if hardware is the problem. Otherwise he can remove all the USB devices except the keyboard, mouse. Then finally the important one. 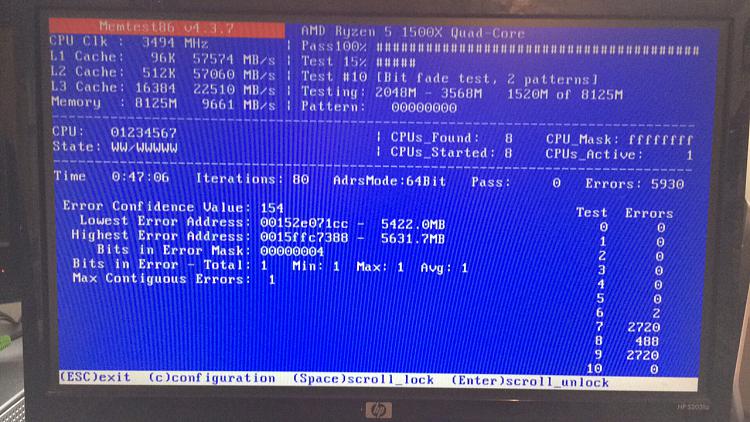 You should understand that Windows does not work on MBR systems any more. It tried to convert your partition to GPT scheme, which is the new norm. It supports large hard-drives. Also make sure that, your system drive is not too large where you install your OS.

My Experience and Solution with Error Code 0x8007025d

Coming to my story, my system had the following specs.

Since my BIOS was like 2011 old, I thought it would not support boot install from USB stick. But I found an option where I can change the hard-drive to USB. So I was really happy.

I actually had 64 bit Windows 10.iso image downloaded long ago. I was of the impression that it was a good installation media, from which I installed the Windows 10 OS previously.

But the dreaded error code 0x8007025d came in the middle and installation went back. Then I searched through one of the forums and I found that using a DVD for install solves the problem.

So then I made a boot DVD using Magic ISO from the same .iso file. Then I changed the first priority boot device to CD and tried to install again. Earlier I completed formatted the partition where I installed Windows 10. I also thought better to delete and make it empty space and did it.

But now when I tried to install it was giving error, that Windows 10 cannot be installed on such type of partitions. This was making me go crazy. Then an idea struck me.

I luckily had a second OS on my desktop and from it went to Computer Management and then created a partition in NTFS form. I repeated the install process. Still the same error.

Earlier I believed that the .iso image media I downloaded was a good one and not corrupted. So now I started to think my theory was wrong.

Related :  How to Fix Remote Desktop Connection Error in Windows 10 or 8.1 or 7

So now I went to the Download Windows 10 site (official one) and used the tool.

It downloads a small setup file which you can run safely and it will then ask whether to install or create a .ISO image file using USB, CD, DVD etc. I tried the second option.

Now I was of the opinion that it would download the initial 1507 (July 29th, 2015) version. Later I found that it gave me the 1709 (Fall Creators Update) version. So no need to download any updates. If I’m wrong, then during the installation process, Windows 10 might automatically have upgraded to the 1709 version. 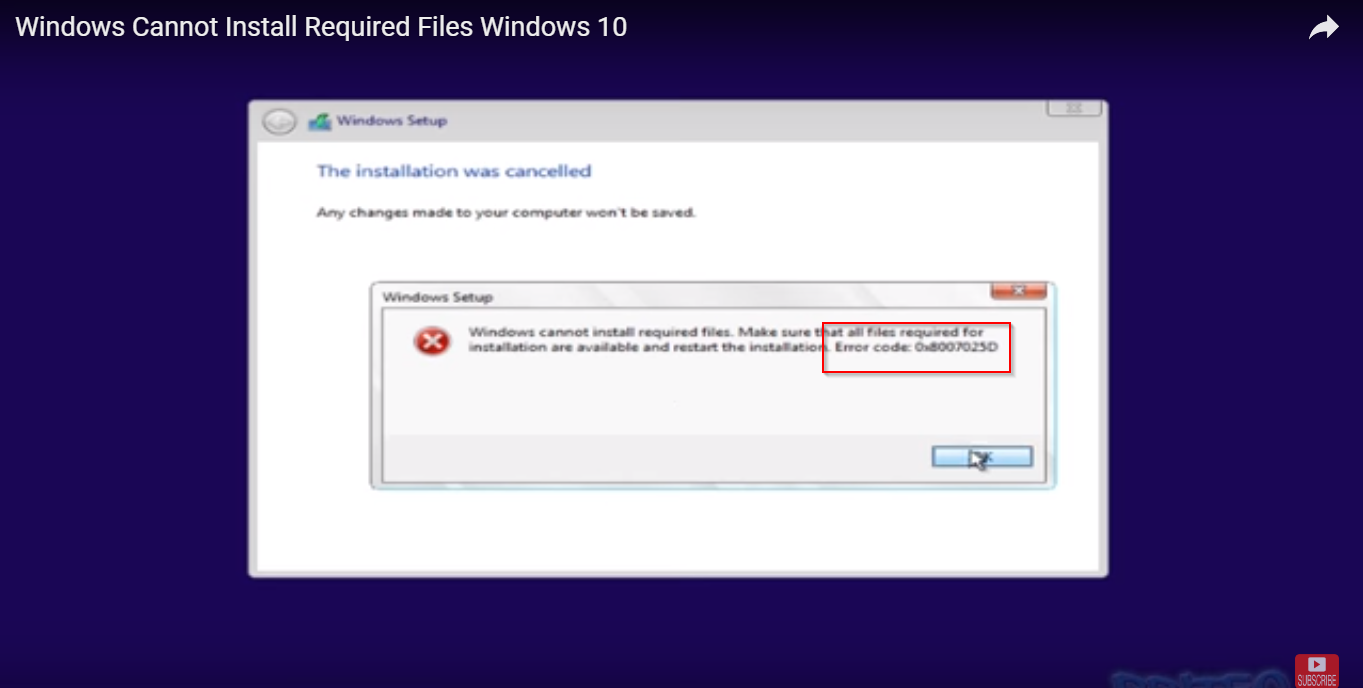 So finally the fix for my Windows 10 Installation Error Code 0x8007025d was a corrupted .ISO file. So always make sure you download the latest one, before you install using USB or DVD.

The TenForums had a recent thread where different users had different problems and took different approach.

One had a Crucial1TB M2 2280 SSD and he partitioned it into 2 or 3 separate ones. Finally, Windows 10 installed using a USB flash drive. So as I mentioned earlier using a too large disk space partition can also cause this error code.

Another user switched off the power to the PC and turned the power on. Then he put the USB installation media in a different slot which was USB 3.0 and the installation process went smooth.

One another new solution for error code 0x8007025d is to disconnect the network connections like your wi-fi adapter or ethernet and try to install. It worked for some.

One had a different configuration.

So if you are having multiple RAM sticks, its better you switch them and try the install again. Otherwise, remove one and see if it works out. That can be a fix sometimes.

You can also try to run the sfc /scannow from an elevated command prompt window, to see if any files are corrupted on your hard-disk. You may get an error like –

“Windows Resource Protection found corrupt files and successfully repaired them. Details are included in the CBS.log…..”

If it’s successful, you need not try the DISM tool. Otherwise, you can go with it and install Windows 10 again.

According to Microsoft team, 0x8007025d refers to ERROR_BAD_COMPRESSION_BUFFER.  As you know USB 3.0 and 2.0 use different modes of communication with the pc. For example if you are using 3.0 device, they use asynchronous handling of data transfer between USB and PC.

The high speed rates may send bad or corrupted date to the buffers. Sometimes due to an old PC the buffers may not handle the date speed or your PC can’t decode the information properly.

Generally a bad .ISO image file downloaded from third-party sites can send corrupt data. So if the .ISO file is missing some internal files, this can give the error code 0x8007025d. Also you can have a bad USB or DVD drive.

In that case also the data transfer will not take place properly. Also having multiple USB devices may confuse the system to boot from which one.

The following are some of the videos which will help resolve the problem.

Finally, these are some of the causes and solutions for Error Code 0x8007025d

If you have a bad sector in your hard-drive it sends wrong data to the buffer, which can disrupt the installation process in the middle like 25% or 50%.

As mentioned earlier if RAM slot is corrupted or RAM itself is failing, this can also cause the error. The solution is to either change the RAM or if you have multiple ones, try using only one.

Sometimes a bad hardware can cause a driver or some kind of issue. In that case you can either repair the corrupt files or try to reinstall again.

4. Decrease the size of HDD or SSD partition

As mentioned before, if the size of the partition is too large, even though the GPT file system supports it, the installation may not be handle that much disk size. So, it’s better to limit it.

As mentioned earlier, in my case it was a corrupt iso file that caused the error.  So downloading a new one from official site can solve your problems sometimes.

If your USB or DVD you try to use to install Win 10, is corrupt you can get this error. So try to build a boot device on a new DVD or FLASH DRIVE.

The reasons for error code 0x8007025d are many. What is the correct cause, can only be told on trial and error basis. If you are lucky you can solve your problem in the first attempt itself. Otherwise, you have to go through all the solutions. Also, this error code seems to come only when you try to install 64 bit OS system.