With Windows 10 release on July 29th, 2015, several videos on Performance benchmarks have been released. One of the important metric that is to be checked with any new OS, is the boot time. But this parameter varies with different software and hardware configurations. So unless you test this factor with the same CPU, motherboard, graphics card, hard disk capacity and type, chipset etc, you are not going to get the same results.

The type of OS (32bit or 64bit) also determines the boot time speed. Several YouTube enthusiasts have measured this benchmark to analyze the speed and performance of Windows 10. But there is some ambiguity in their results also. Some of them have reported the outcome from “power on” to the “login screen” while some have measured it to the “desktop screen”.

How Good is Windows 10 Boot Time (After Release, Not Preview Builds)?

TechSpot has recently (Aug 10th, 2015) made a comparison of boot speeds in their performance article. This data is more authentic, as the concerned website used the same specs for comparing boot, sleep and hibernate times in Windows 7, 8.1 and 10 using the 64 bit version. The configuration setup was something like this –

Using the “Boot Racer” software, Steven Walton tested the time it took to boot, from the Windows logo to the usable desktop. Mathematically speaking, Windows 8.1 still stood in the first position in this performance test. Though the margin of difference in secs was only 1 or 2 between all the 3 OS, Windows 10 took 6 secs to boot to the usable desktop. 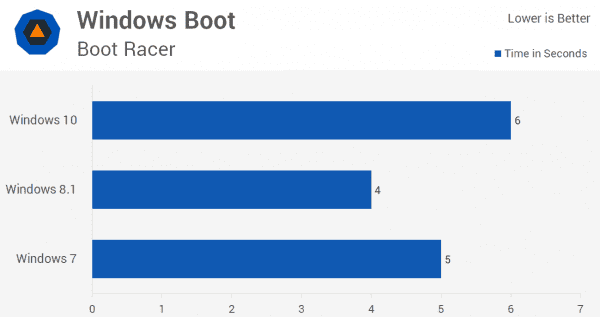 This faster speed can also be attributed to the usage of “Crucial MX200 1TB” in their hardware configuration. According to the specs page on the vendor site, the sequential read and write speeds were 555 MB/s and 500 MB/s respectively.

ITPro (UK) also tested the same parameter using “Lenovo ThinkPad X1 Carbon and a Microsoft Surface Pro”. Both machines were able to boot to login screen (it’s not the desktop here) within 8 seconds on both Windows 8.1 and 10, with only fraction of a second separating each other.

Just to make my assumption clear, the role played by SSDs in Windows 10 booting times, the time taken by TechSpot machines to boot was much less compared to the current provider machine. Also in the ITPro case, it was only till the login screen, while in the former it was till the desktop. So there must be some other factor which is causing this difference and my hunch is that it is due to SSDs.

In another case, this benchmark was tested with mSATA on Gigabyte Brix i5-5200U. But in this case an SSD was used. The results were quite impressive, with Windows 10 just taking 5 secs to boot from BIOS to login.

“Riccardo Casati” tested with a high-end configuration similar to this.

As you can see, the processor and SSD were quite competent enough to produce the best results. The Windows 10 boot time in this case was around 8 secs from BIOS to desktop screen using a 64bit OS and SSD.

This YouTube from “CIRCUS MAXIMUS” shows the boot time comparison in Windows 10 with normal HDD and faster SSD.

Till now the configurations tested were all high-end and were mostly using the recent “hardware” technology. In order to compare the results with a low-end configuration, I took the below YouTube video results. The configuration was something like this –

But here the results were totally out of the blue. Though this “set up” was also using SSD, the boot time was around 24.5 secs from BIOS to desktop and the restart also took like 27 secs.

Some of the boot times were reported with SSDs installed. It must be said that the read and write speeds of traditional HDDs vary vastly with the new SSDs. The SSDs are 2x to 10x times faster than normal “mechanical” HDDs. So even if you have gained any speed improvements in your Windows 10 boot times from earlier versions of Windows 8.1 and 7, it can be due to the hardware configuration also.

So unless one reports any comparison with the similar kind of specs (both software and hardware), you should not be tempted by the quicker boot times that are mentioned on the Internet. But yes, to say, Windows 10 is worthy enough of its compatriots like Windows 7 and 8.1 in boot times. It is hard to say, that there exists much distinguishableness of boot times, to the naked eye when compared to the recent versions of Windows OS.

But till now, from what we have seen on the Internet, Windows 10 is quick with SSDs and is worthy the upgrade and will not see any degradability, if you take into account, the boot-time factor alone.