Windows 10 latest leaked build 10036 has a transparent Start Menu. Microsoft also confirmed that it will increase pace in releasing next builds.

There is a commendable change to the version released at the Technical Preview. File Explorer, Documents and Settings are listed in the menu with icons. This indicates that they are going to remain permanent. The expand button also has been refreshed.

The build and release cycle of Windows 10 by Microsoft

Bugs also arised in the latest unstable version. There is a new drop-down menu for a folder created inside the Start Menu. But you can’t close the folder and the menu crashes.  This may be corrected in the RTM version which is rumored to be released in June 2015, according to Neowin.

On ExtremeTech, it was reviewed that Windows 10 Start Menu design is more like a hybrid between Windows 7 and 8. You may ask a question where the Start Menu in Windows 8 is. We are all well-versed with the ‘seven’ version and we don’t need any more explanation.

It’s the old-style and was very easy to get things done. In 8, we had the ‘Metro Apps’ as Tiles. These Tiles would be included in the Start Menu in 10.

So the left side in what we can call the “7” face and the right hand side has the 8 face. There are few improvements though. The power button has moved to the top.

Also in the earlier releases, Documents, Computer and Control Panel have moved to the left. This can be called the ‘pinned’ section at the top. This frees up space on the right-side for the tiles.

Related :  How to Recover Files from Lost/Deleted Partition on Windows 10

It’s not that strange when you look at the Tiles part. You get a fistful of apps like Weather, Photos, Map and Store. The advantage with this setup is that, you can totally remove all of them – just like the plain old version.

Related News – Windows 10 vs Windows 7 : Which One Would You Prefer?

Otherwise, you can use that section for large icons of your favorite apps and games. You can also turn off the live tiles if there are many updates and animations.

What Custom-Make can we have?

Customization is another key feature of Windows 10 Start menu. You can change the background color (right click > Personalize). You can drag live tiles around and pin your favorite apps on the left section. The most notable custom feature is that you can make the required ‘system’ items appear, like – Control Panel, Documents, This PC etc. To do this, you just have to right-click the taskbar > Properties > Start Menu > Customize. But by default very less items are available though.

The remaining things are more or less common. You can type any app or application name in the search/run box at the bottom. If the name matches any, it will launch similar to the Windows 8 charms bar.

Related News – How To Manage Passwords in Windows 8.1 – Applies to 7 and 8

But there is a bug here also. Some apps may not launch in the current unstable build. If nothing comes up in the search, then a Search app pops up. This is similar to the Bing search engine of the web version. But the con side is, you can’t change it Google.

Clicking all apps does the same thing as in Windows 7. The power button does its functionality. Clicking the portrait, lets you lock or sign out of the system. There is a facility to switch back to Start Screen, just like the Windows 8 version, if you wish. Earlier it was required to sign in and out, if you wish to change from Menu to Screen. But in the latest builds, it has changed.

How to Shift from Start Menu to Start Screen and Vice Versa?

Open the Start menu by clicking the Windows logo on your taskbar and click the ‘Expand Start’ icon. This consists of four arrows pointing outward, in the upper right corner. To switch back, open the Start Screen and click the “Restore Start menu” icon which has the same symbol as earlier. Windows 10 memorizes your option and will load Start Menu/Start Screen, the next time you boot.

The DailyTech, also spotted list of changes from the earlier builds like 9926. Windows Start Button shrinks in size and darkens. It is similar in size to the taskbar’s “small” icon set, but embedded in a full sized taskbar. There are more subtle changes. It has a Modern Glass look. It makes the Start Menu look more attractive in full screen mode.

Start10 as an Alternative to Windows 10 Start Menu?

Already there are many more alternatives to Windows 10 Start Menu coming up. Start10, smartly named as a replacement for 10 version, is being produced by Stardock. This company already produced the Start8 (a Start Menu for Window 8 and 8.1). In this version, it will imitate the Windows 7 layout, with pinned and recent programs on the left. 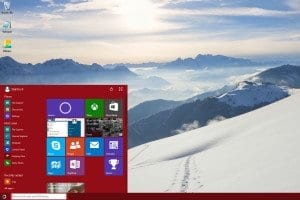 Also the shortcuts, like libraries, File Explorer, Control Panel and shut down options are pinned to the right. Users who are interested in pinning the tiles, can pin to the right. The difference in Start10 is that it will suggest a scrolling list of Live Tiles instead of an ever-expanding menu pane. It also supports dragging and dropping of items. It’s search bar will include features like context menus, jump lists, and directory shortcuts.

Related :  How SSD can Improve Boot Time in Windows 10 and Windows 7

Currently there is a beta version as part of Object Desktop. A standalone verion may be available in this fall at $5.

It’s little bit early on the expectations of the final version of the Start Menu. But things are progressing at a rapid progress. We can have a taste of the ‘release’ version from different builds found on the internet. Hackers are releasing pictures of the latest Start Menu on Twitter and at many more places. With 10 being dubbed as the ‘One’ OS for all devices, we still have to wait for the final version.