You are here: Home / Solved / Reasons behind Windows 8 Sleep Crash – Some Solutions

Is you computer failing to recover after a Windows 8 Sleep crash? The main reason can be incompatible drivers. So uninstalling and re-installing the drivers in many cases can solve this problem.

In one case, a user upgraded from Windows 7 Ultimate to Windows 8 Pro. Every time his computer goes to sleep mode, it crashes and restart. The cause can be an old Logitech camera driver and a Norton Internet Security 2013 driver. So when you have a driver conflict, it is best to configure your Windows to generate a memory dump file.  The mini dump file is generally in your Windows folder. 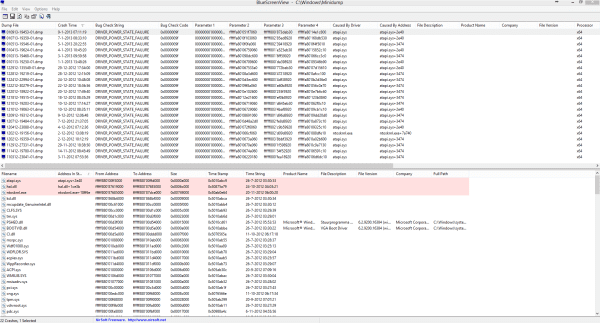 The error reports generally point out to Code 41 and 6008. In this case, the conflict was with a driver installed with AMD Catalyst.

Another user had a different kind of crash problem.

1. Computer is in S3 ACPI sleep (or hybrid sleep I guess per the latest Windows 8 implementation)
2. I wake up the computer – it comes on-line, I login, click a web browser, etc.
3. About 30 seconds later – black screen, hard reboot required

After the reboot I have the following in the event log:
“Windows failed to resume from hibernate with error status 0xC00000BB.”

The solution reported was not to use Sleep or Hybrid Sleep at all. Its better to shift to Hibernate or Shutdown instead of sleep.

There is a different kind of reason if your computer is frozen when you leave your computer for a long time. If the cause due to viruses and malware is negated, then it has to be a faulty hardware. Sometimes dust accumulating with fans on the CPU can also be a cause. So keep your hardware clean and tidy from time to time.

One user found that his faulty hard drive was the reason behind his sleep crash. You can use a small utility called, HWmonitor, to check out the temperatures and voltage of your motherboard, which can sometimes be the reason behind crash failures.

If you upgraded to Windows 8 Pro Build 9200 and have a failure when you press the sleep button, there are times it can be a driver conflict. One particular user had problem with NVidia drivers generally used for graphics display. In that case, its better to visit the source driver site and see if there is a solution for it. Otherwise, you can use the drivers provided by Microsoft through optional updates.

In the olden days, the crash problem was solely due to graphics drivers (sleep or hibernate issues). But with Windows 8/7/Vista, the storage drivers and chipset drivers may also be involved in the sleep/hibernate related crashes.