On October 25, 2012 Microsoft released the stable version of Windows 8, releasing the RTMs,  Consumer Preview (CP) builds earlier.  A year later, October 17th 2013 Windows 8.1  was released as part of the NT family of OS.  People who bought Win 8 were given free upgrade to this version. Three years earlier on October 22, 2009, general availability of Windows 7 took place.

Many customers of Microsoft released their tablets based on Windows 8. But wait a minute? Are you curious to know the speed benchmarks in the Windows 8 vs Windows 7 performance battle? See this infographic and get an answer! 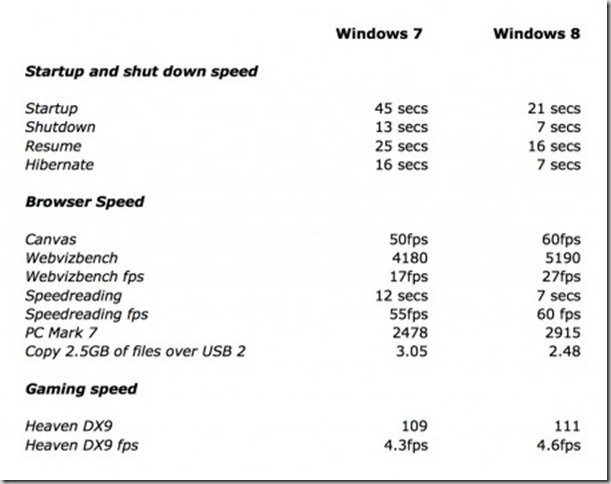 Also Windows 7 is more likely to consume more power than 8 and 8.1. This is because of extra power management features of the later. But a ThinkPad is said to give only half-life of 4 hours instead of the advertised 8 hours on 8.1.

Related :  How to Buy in Amazon the Right Way - 7 Tips to choose the Best Product

In another test by a YouTube user (https://www.youtube.com/channel/UC8ipJwWINoZ8q6Jc86EfcUQ), a different test scenario was used. The results were little different from the above.

In the maximum, minimum and browsing case, there was not much difference in battery life between Windows 7 and 8.1.

In a PCWorld test, Windows 7 lasted 5 hours and 7 minutes compared to Windows 8.1, whose battery life ended in 4 hours and 41 minutes. This is a difference of approximately 25 minutes.

Tha main reason could be the difference in drivers which can improve or decrease battery performance. If you are using a Wi-Fi radio’s default driver set to maximum, it could impact the battery life. The same holds true with PC using Wi-Fi signal.

Poorly tuned third-party applications can also have a say in the battery drain of Windows 8.1. Brightness of the laptop is a crucial factor in this regard.

But using a i7-2820QM processor and Windows 8 CP with a H.264 video produced better battery life than Win 7. But when an i5 was used to do the benchmark test, Windows 7 was slightly better.

Earlier in Feb, 2012. end, “ITWorld” came up with a review on Windows 8 Consumer Preview battery life performance. It tested variety of laptops and compared Windows 7 SP1 & Windows 8 CP in terms of power consumption. For the test they used the following 3 hardware devices.

Laptop A — Acer Aspire 7551G. A Run of the mill 17-inch laptop with a Phenom II X4 CPU and 4 GB of RAM. Good for multimedia, but not particularly well-suited in the battery life department.

The results were impressive from Windows 8 point of view when measured with the PCMark 7’s “Lightweight” test.

Related :  [Case-Study] Why Cleaning Software is Unnecessary in Windows 7 and Windows 8.1? 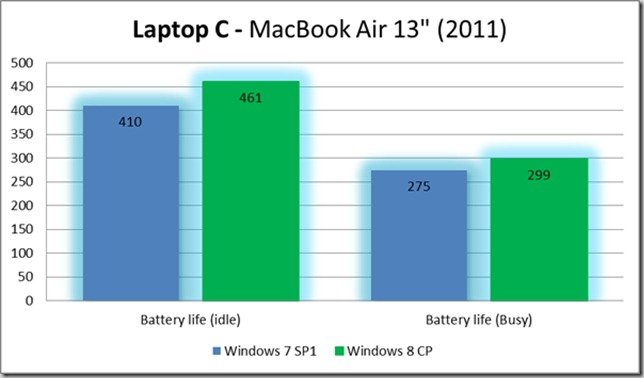 The idle battery life of Windows 8 CP increased by 51 minutes when compared with Windows 7 SP1 on Laptop C i.e MacBook Air 13”. This was the maximum gain out of the 3 laptops. The other two laptops i.e Laptop A and B gained 19 minutes and 40 minutes respectively. The busy battery performance life measured using PCMark 7 workload feature, significantly reduced compared to idle life. While in Laptop A, the increase was negligible. The other two laptops i.e Laptop B & C showed an increase of 19 minutes and 24 minutes respectively.

According to this article on social.technet.microsoft.com, one user complains of battery drain in Windows 8 RTM. He basically uses Windows 8 Enterprise RTM on a HP Elitebook 8440p notebook. But later he found out that, the resource hog was not Windows 8 but was because of his CPU.

After a capture with Intel BLA, the main problem seems to be the CPU (Intel i7 vpro), that keeps running  too long in c1 state, even when using powersave power plan.

You can use sophisticated laptop optimization utility like Battery Optimizer to get battery life in Windows 8. This little program is freeware now. 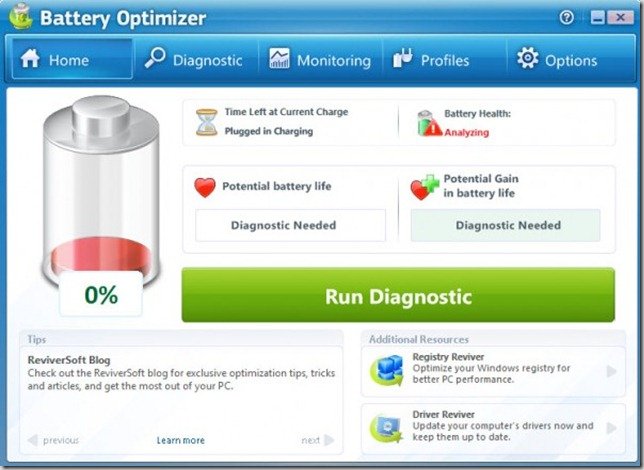 According to “TomsGuide” the significant improvement in Windows 8 is its battery life compared to Windows 7 without reduction in performance.  The battery life was tested in normal use, with a mix of editing documents, reading Web pages, playing games, editing photos and streaming videos in desktop mode. The test didn’t use Metro apps in order to a proper comparison with Windows 7. 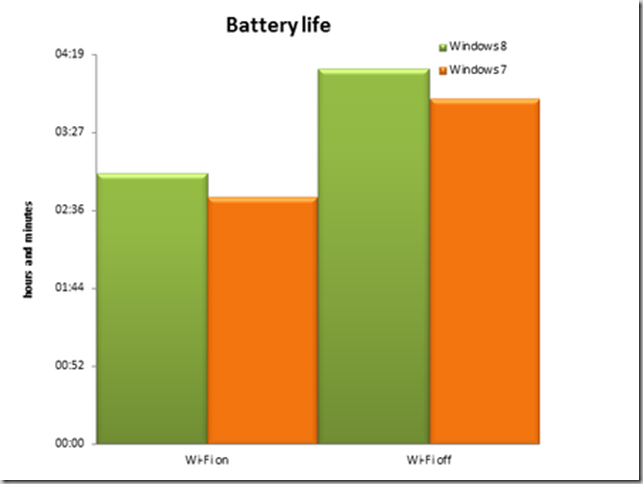 The Windows 8 vs Windows 7 performance contest shows that Microsoft has made significant improvements to make Windows 8 more eco-friendly. The tests on most websites indicate the above statement. Though only time will tell of the deficiencies that may come up, when Windows 8 is released into the market.

Ya, I've been writing this blog for over 10 years. I love to write about Microsoft Product Error codes and Tech How-to guides. I learn by reading stuff on forums and social discussion topics. This is about Windows 10, Skype, OneDrive, Outlook, HDMI Solutions, Facebook, LinkedIn tutorials, App reviews.

3 thoughts on “Benchmarks of Windows 8.1 vs Windows 8 vs Windows 7 Performance in Battery Life”