Microsoft was buzzy last few days with the release of Office 2013 consumer preview. If you are fooled by the name 2013, thinking that it’s a upgrade or something to the 2010 version, you are caught on the wrong foot. The new version is a cloud-based web solution which can be also used on desktop and if you check the Office 2013 download page of the consumer preview, you won’t find anything related to 2013. You can download the official version from the link below.

As you can observe on the official home page, you are greeted with an ad related to 2013 and Office 365 posted everywhere. Yes, its nothing new, but it’s the same cloud thing we talked about sometime ago.

The basic system requirements for this version are : 1 GHz processor, 1 GB of RAM and 3.5 GB of free disk space. You also need to be running on Windows 7 or Windows 8 Release preview. There is scattered talk that this version will not run on Windows XP and Vista.

There are basically 4 choices for the user depending on their personalized needs.

Related :  How To Transfer Files from OneDrive to Google Drive - 4 Methods

Office 365 Enterprise includes everything in the ProPlus version, as well as Exchange Online.

The time required to download Office 13, can take anywhere between 15 to 135 minutes depending upon the internet speed.

The ribbon interface in Office 2010 remains the same in Office 2013. The ribbon remains the base of Office GUI, the small difference being that the text and icons inside are a bit larger and are spaced farther apart. These little changes work out best on large monitors and touchscreen displays. There are two new tabs added in the Office 2013 version – Design and Developer and are not too big for laptop display. The Developer is already present in Office 2010, but is hidden. 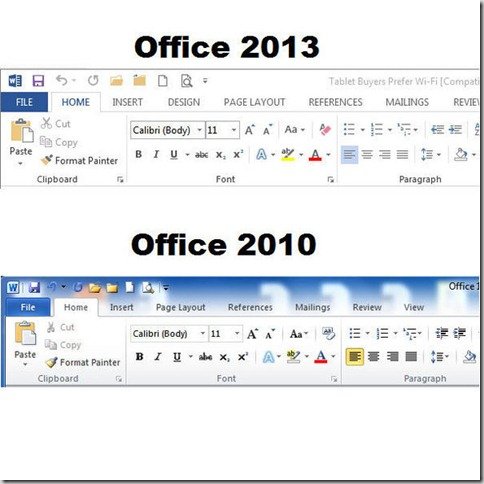 Microsoft has made radical changes in Word 2013. You can directly import a PDF into your Word document like .doc or .docx , edit the document and save again as either PDF or DOC. The magic of Word 2013 is that not only the original documents formatting remains constant like – headers, columns, and footnotes – but also other elements like tabled and graphics which are imported from the PDF can be directly edited in the Word document. You can also embed a PDF file in the Word document.

Another smooth feature available in Word 2013 is to connect online resources and bring them inside your documents. Without leaving Word 2013, you can search for YouTube or other videos in Bing and then embed the HTML code in the Word document.

Once the cloud service, SkyDrive is integrated with Flickr account, you can easily jump to your online photo collection present in Flickr and embed the photos directly in the Word document, WITHOUT leaving Word 2013.

Embedding a screenshot from a running app on your system is very easy. Click Insert > Screenshot. This will open a window, containing thumbnails of every open window which will become visible. Click the image you want and it will appear where your cursor is.

Flash Fill is an interesting feature in Excel 2013, where you can take an element of data that you’ve entered already in one column and enter in a second column, Flash Fill will intuitively try to fill the other values in the second column. 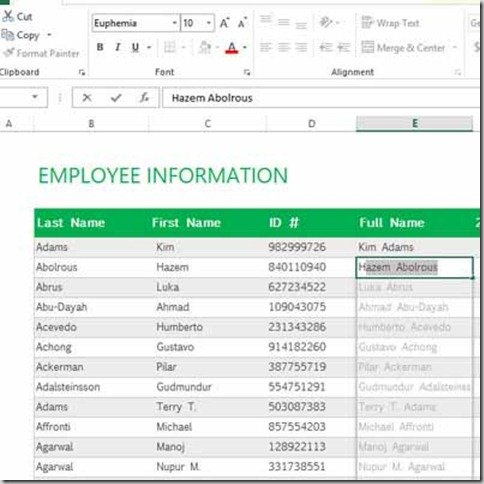 Color and Symbols help you to analyze data more quickly. Excel 2013’s Quick Analysis tool automatically suggests conditional formatting that will help you visualized data locked in your spreadsheets. It also suggests the most appropriate types of graphs – bar, pie, scatter and etc based on the data set on your sheet.

Select the rows and columns you wish to have analyzed and click the icon that appears in the bottom right corner and choose the conditional formatting that suits your needs. Instead of gray colored numbers of rows and columns, you’ll instantly see a spreadsheet formatted with color scaled, bars, and icons.