Computer users and teenagers who are addicted to gadgets and mobile devices, are feeling the knack of it. People stay long in the night working on Facebook or commenting on blogs,  and getup late in the morning. But what is the culprit that is preventing you from sleeping at the right time? This state of sleep deprivation is called “delayed sleep phase syndrome” and makes you drowsy throughout the day. The culprit is nothing but the amount of blue light emitting from the gadgets, mobile devices, smart phones and computer. During the night time, the brightness of the screens is so that it reduces the “Melatonin” hormone which controls your sleep and wake cycles.

One solution to get back sleep at the right time, is to adjust your computer brightness and contrast to suit your late night settings. F.lux is a monitor eye protector software which adjusts your computer display with the time of the day.

Generally, the screen is bright in the day and it’s like looking at the sun. But at 9PM, 3AM you should probably not looking at the sun, but should feel like you’re working with the moon. Once this application is installed, it’ll sit in the system tray and the monitor color brightness will change according to the time of the day. This also suits with the research done on blue light. You just need to tell the software the type of lightning you’ve and the place (latitude and longitude) you live in, the rest is taken care by F.lux which is a computer screen eye protector. Generally with F.lux in the night, your screen will look more reddish which will make you sleep at the right time and also keep you away from blue light which is harmful in the night.

Related :  Stellar Converter for MBOX - Special Features, How to Use and Pricing

More Information on color spectrum and white point at instantfundas.com

Normally the color temperature of the day is set to 6500K, known as D65 which will be reduced to 5000K by night. You can also postphone this tool display settings for an hour to do colour sensitive work.

f.lux for your iPad, iPod, iPhone Screen in the Night

There are many accessories and utilities to protect your eyes from directly looking at light sources for long period of time on gadgets like iPhone, iPad, iPod Touch or any smartphones. But with f.lux entering the arena, there is a free Cydia tweak for your jailbroken iPhone, iPod, iPad that changes the hue of the screen based on the time of the day. A pleasant filter is added during the night and is removed during the day. 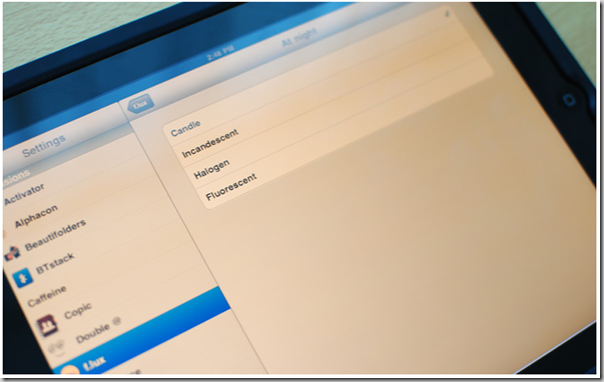 As of now, the tweak comes with total of 4 filters. 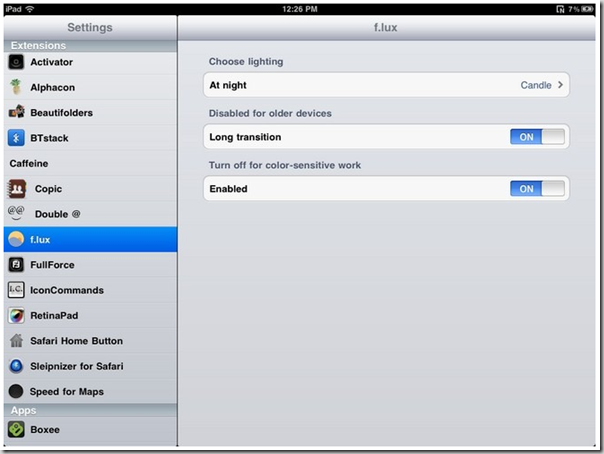 f.lux is available in the Cydia store and is present in the Big Boss repo. It works well with newer devices and is compatible with older devices too.