Windows 8 is elegantly designed such that its themes fit perfectly onto a dual monitor setup. So if you are using dual monitor setup you can right away test Windows 8 theme features for yourself . But you need to make sure that both the monitors are using the same resolution.

Dual monitor support is enhanced in the current Windows 8 Release preview and is flexible and more improved than in Windows 7. Windows 8 automatically detects your second monitor but as said before you need to configure the resolution in your control panel.

There are several features Microsoft tried to improve in its upcoming Windows 8 – extended display and second screen are some of those elements. This is much required when an user looks for a lot of workspace on his desktop PC and thus connects to dual monitors. Some would even like their second display to work as an HDTV.

How to Extend Display and Second Screen Feature in Windows 8 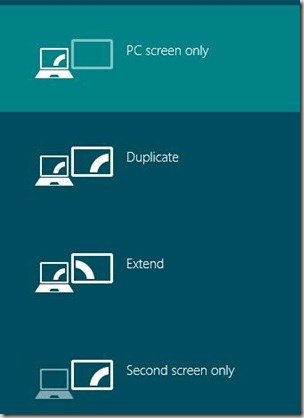 You will now see 4 shortcuts or options.

You can also watch a YouTube video, which shows Windows 8  on a Dual Monitor PC.

There are more YouTube videos which explain into the details about setting up multiple monitors for your PC.

DYI to set-up multiple monitors for your PC

How to use Dual Monitors in Windows 8 for different purposes

Installing Windows 8 and set up on your desktop

Promotion: Buy this Monitor Y-Splitter useful for dual-monitors for only $14.36.

Hope you like the Windows 8 dual and extended monitor support for your present configuration. If you think you need more support please mention in the comment section.