You are here: Home / Windows 7 / Customize the default behavior of Drag and Drop feature in Windows 7, Vista, XP and 8

Windows users are so familiar with drag & drop feature, that they get so frustrated when their mouse stops working or gives trouble. The default behavior of drag and drop in Windows 7, XP, Vista and now even in Windows 8 is to copy, move and create shortcut of files and folders. But did you know that this default behaviour is dependent on whether your files or folders are on the same partition or not? Well, this was new to me! I failed to understand why drag and drop doesn’t work sometimes and seem to work the other times.

The standard behavior of drag and drop feature is to move files from one folder to another folder if you are on the same drive  i.e from D:A to D:B. But if you are using drag and drop feature on different drives i.e C:A and E:B the default behavior is to copy files from one folder to another folder. This default behavior can be changed by using Alt, Ctrl and Shift keys along with drag and drop. When you press Alt key and use drag & drop, the files are copied from one explorer window to another window, even if you are on the same drive or partition. Similarly you can create a shortcut of a file if you press the Ctrl key and do drag & drop. Pressing Shift key and doing drag & drop will move the files.

How to Customize the  Default “Drag and Drop” behavior in Windows 7, Vista, XP and 8

Sometimes, users want to customize the default behavior of drag & drop (i.e leaving the Alt, Ctrl and Shift key functions) to accommodate their needs. You may want to copy files instead of moving even though you are on the same drive. Otherwise, you may want to create shortcuts whenever you do drag & drop of files. Drag & Drop Editor is a free & small software program from WinAero which perfoms this customization requirement with ease.

The functionality and user interface of this application is very simple. Just download the .zip file and run the .exe file after extracting it. The zip file also contains a separate executable for Windows 8. 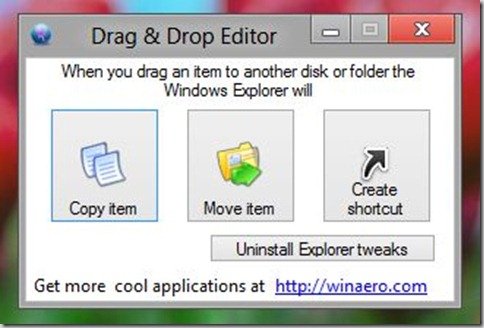 As you can see above, you can customize the default drag and drop behavior to any of the following 3 actions. 1. Copy item 2. Move item 3. Create shortcut You just need to double-click the icon to make it the default functionality of drag & drop feature. But after some-time you decided to get the normal drag and drop feature back, just click on the “Uninstall Explorer tweaks” button. You will be back where you started. This customization will not effect the Alt, Ctrl and Shift key functionalities with drag and drop. The application  works with Windows XP, Vista, 7 and 8.