How do you Get It?

Microsoft will alert you once the release date is confirmed. Next, you are provided with the ability to download and install Office 2013 for free.

What Editions are supported? 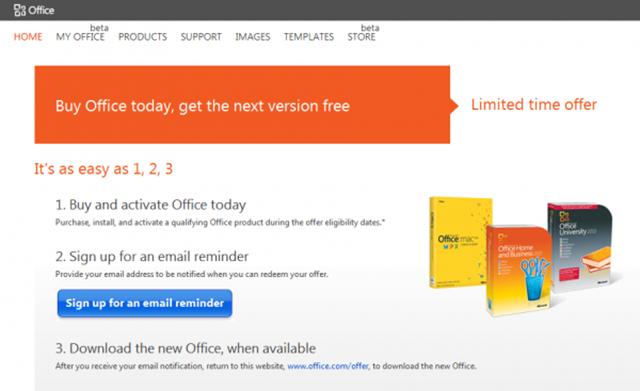 The following genuine Office products meet the purchase requirement of this Offer. Please note that not all products are available in all geographies.

But there are some restrictions to this offer. The qualifying products are valid in the following formats.

This offer is not valid to the following products.

These may not be so much profitable products for Microsoft which couldn’t come under this free upgrade.

When is the release date of Office 2013?

LationosPost reports that no official release date has been released for Office 2013 suite of products. But Microsoft’s corporate vice president of the Office Division Kris Koenigsbauer promises a launch during the first fiscal quarter of 2013, which falls between October 1, 2012 and December 31, 2012.

Hope you like free Office 2013 offer and would take its fullest advantage. Let me know your experiences with the offer in the comments section.