Many enterprise users upgraded to Windows 7 after XP’s shut-down.

Will Windows 10 catch up?

Also Read – End of Windows 7 Support: How to Switch to Windows 10

Business owners be interested to do another upgrade? What benefits does new Windows OS offer to the Microsoft community?

Let’s see features which will enlighten your knowledge on Windows 10. 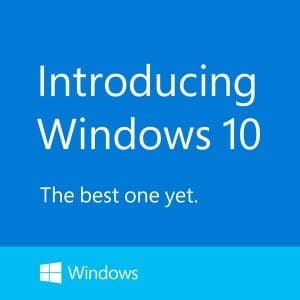 Tailored Experience for Each Device

Unlike Windows 8, where all devices had the same interface, Windows 10 will have different UI controlling each device.

It will run on a range of devices – from servers to enterprise datacenters worldwide, desktops to smartphones, cloud devices to internet of things.

Some of these devices are palm-made, others meters apart.

It can run on new devices like OHP projectors where the devices are controlled by mice and keyboards, styluses and gestures – and some devices can change between input hardware.

Improve knowledge on Windows 8.1 – How To Create Recovery Media in Windows 8 or 8.1

Most of the Windows 8 audience were beleaguered when they saw that the familiar Start Menu was missing in Windows 8.

It got little improvement in 8.1, but the old interface was not back. So many users complained, that Microsoft had to make changes in 10. It will be easier for navigating specially for people used to old Windows platforms for desktops.

But there are new modifications to the old Start Menu. Apps get pinned as Live Tiles.

They work as shortcuts to your apps and also provide notifications in real time. You can also resize the Start Menu, if you like.

Metro interface of Windows 8 didn’t convince many of the customers, is out of the way.

You will see no more display of large tiles on the HomeScreen.

Just like it’s old predecessors you can arrange items on your desktop and add your favorite background.

You also switch to a tablet mode where you can use your touchscreen PC without mouse and keyboard.

The suffocating feature of Windows 8 apps was they would open in Metro interface.

You need to switch to desktop mode again to work with applications.

But that’s gone in 10. You can open apps in Windows. With 8.1, Microsoft made little changes to these apps interface.

A title bar was added with minimize, close, maximize buttons which altogether were missing in 8.

Now in Windows 10, they can be resized and moved around. Now you can work with applications and apps at the same time and same view.

Now there are snap enhancements in 10, that four apps can be snapped on the same screen.

Windows will also show other apps and applications which are competing and even make smart suggestions for additional snapping.

Switching betweeen open files and multiple desktops for different purposes are added to the new task-view button on the task-bar.

You can switch between the different desktops created for work, play and blogging and have more space for apps and applications.

You can easily or pick up where you left off on each desktop.

Though the Alt+Tab feature is present in 8.1, it works seamlessly in Windows even with multiple desktops.

This is the concept Microsoft tries to envisage with Windows 10.

With Windows 8, it was keen to push the “tablet” mantra that the traditional experience of desktops, where mice and keyboards were the primary form of input suffered.

This trouble was somewhat rectified in the 8.1 and Update 1 release, but now solved in 10.

Continuum will allow the Windows 10 interface to “morph’ itself based upon the hardware it is running.

For example if you are working with ultra laptops or 2-in-1 hybrid like the Surface, you’ll perceive the standard desktop interface while the Type Cover keyboard is connected.

But when you remove it, it detects the change and prompts you to switch over to tablet mode.

Developers are at an advantage with Windows 10.

You will now be able to create a single app that suits all Windows devices from smart phones through large display touch devices.

Based on the organizational identity it allows companies to reclaim or re-use licenses for apps purchased.

Bigger enterprises can also create their own customized app store for their employees.

This will include the ability to include selected published apps along-with in-house apps.

They can be framed in the same windows where programs are also residing and can be resized, moved, maximized, minimized and closed. 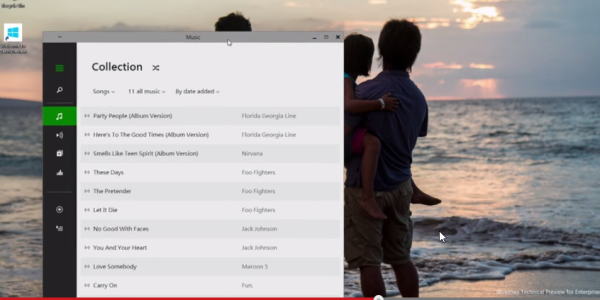 There is flexibility in the safety features as these updates will continue to be pushed out on a monthly basis.

Customers will instantly get the updates via Windows Update when they are available.

Businesses can ‘opt-in’ to a fast-paced cycle of updates as well.

Another security feature of paramount importance is the lock-down feature of mission critical apps for businesses. Also, Windows 10 allows segment user groups to deliver updates in a more flexible way.

Windows 10 will include extended support for built-in mobile device management (MDM) features – making it comfortable to manage devices remotely and from the cloud.

Admins will be able to manage device through routine methods like Active Directory and System Center.

Microsoft may be boasting 10 as “great advancement forward”, but the truth is that it’s a mix of the last two editions 7 & 8 – a Windows 7.5 if you can put it that way.

This is evident from the settlement it made on the return of Start Menu, which will appear on all devices except the tablets.

What is for the Businesses ?

It’s more clear that Microsoft is luring enterprise users to follow the upgrade path from Windows 7 or even XP. Windows 10 provides less difficulties in transiting from the earlier OS. Windows 8 was more like a cultural shock to many of its enterprise firms.

What is the promise?

“what you see currently in the Windows 10 Technical Preview is only the top of the gold mine and further developments are exciting”, which showcases the changes planned for the final release of Windows 10 – due mid-2015.

The user interface developments from XP help you increase your productivity.

But first of all, to use plethora of its features, you need to choose one of the Aero themes.

Themes especially designed for Windows 7 and coming officially from Microsoft include a desktop background, a screen saver, sounds & designs to personalize your desktop.

Press enter to select “Change the theme” and select one of the 7 Aero themes, as easy as that.

The theme will be downloaded under “My Themes“.

Taskbar icons are larger. Each program appears as single icon in the Taskbar even if there are many files under one program – like Word or Excel.

You can pin items to the Taskbar or Start Menu. Jump lists, Peek view, Shake, Snap feature, Desktop gadgets are some of the desktop enhancements from previous versions of operating systems. 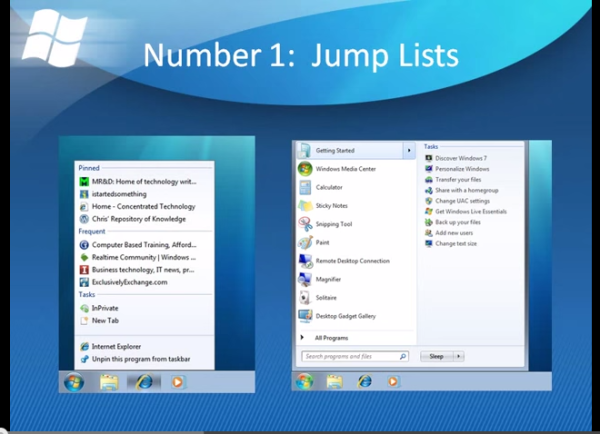 You can change your user account picture, change your wallpaper, change the size of the text on your screen etc.

This will help to change your PC look that suits your needs.

Libraries, Search for Programs & Files, Windows Explorer Search are some of the other exciting features.

There are some other Windows 7 essential features.

There were also some hidden features in Windows 7. For example the God Mode, is ubiquitous.

It flexibly puts hundreds of settings from all around the operating system into one place.

To create a God Mode, you just create a folder on your desktop – or inside another folder- and name it:

The resulting folder will contain 270 items, representing almost all the configurable options in Windows 7. 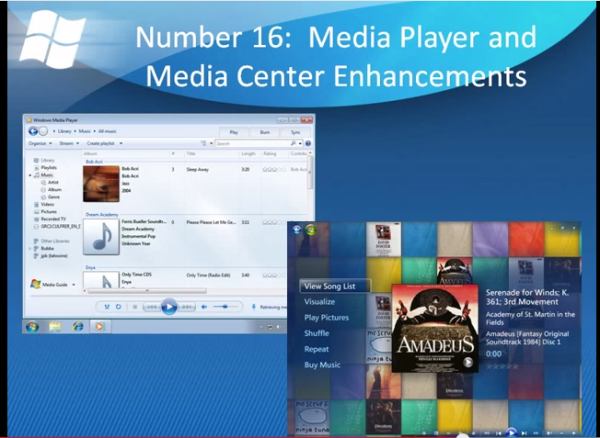 Enhanced Calculator is one of the new features.

There are extra tricks up, which you’ll find under the View menu.

Worksheets using which you can calculate a mortgage payment or a monthly grocery bill. Maintains a history of your old calculations as long as the program is open.

Wordpad’s file support, Reliability Monitor, Problem Steps Recorder, Power Efficiency Report, Pin Folders to the Taskbar, Wipe Free Disk Space, “Virtual” Wi-Fi, Hotkey a Window between Monitors are some of the other extinguishing hidden features which can be brought up for regular use.

As “FirstPost.com” blogs about the easiness with which you can upgrade.

The new software seeks to offer “the familiarity of Windows 7 with some of the benefits that exist in Windows 8,” said Joe Belfiore, a Microsoft executive who oversees Windows design and evolution.

Windows 10 is seen by Joe as a new computer with a more powerful CPU and RAM, better Graphics card without having to “learn a new way to assemble it”.

For example, it will suggest new ways to navigate through files without forcing to abandon the old methods.

Though there may be disputable changes in Windows 10 Enterprise, the personal consumer experience will remain the same, if everything goes as planned.

On the contrary, if you would like to stick to the PC, than Windows 7 is not a bad-bet considering the price.

It’s like comparing “Gold vs Uranium”. Both have their distinguishable features, but each one is adaptable to those times.

System requirements may also not much change in the Windows 10 vs Windows 7 comparison.

More cloud, more hardware friendly would be the new OS. Windows 7 would still be the highest market-share of desktop operating systems and suit your PC needs.

But if you are planning to upgrade from XP, than it’s better to wait next mid-summer of 2015, as you will be able to promote to Windows 10. Since the pricing is not yet clear, you still have to keep your fingers crossed.

Analysts are also saying that Microsoft is considering a subscription model – just like Office 2013-for its new OS. So Windows 7 may be much cheaper considering the one-time cost.

Also, according to Gartner, as half-of-all-the-PCs are used in office, enterprise owners may prefer the Windows 10 version instead of the 7 upgrade, as it touts new security and management features for business customers.