Windows 8 Hidden Features not yet revealed by Microsoft

We earlier talked about Start Orb/Menu/Button disappearing in the consumer preview of Windows 8. But the designers of Windows 8 have included a hidden feature (Quick Access Menu – QAM) which facilitates quick access to some wonderful system tools. 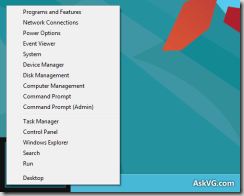 In earlier operating systems from Microsoft, you’d typically use a snapshot tool Greenshot to take screenshots of a specific window, pop-up window or part of screen. If not the software, you had to use the default key options provided in the operating system like Print Screen, which would take the snapshot of the whole screen and you now had to paste the clipboard content to an image editing software like MS Paint, Adobe Photoshop etc.

This process is tedious and has been reduced in Windows 8. 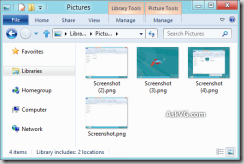 But the con of this feature is, you don’t have an hotkey like “Win+Alt+Print Screen” which can specifically save a particular window.

Earlier you had to reboot to go into SAFE MODE. But now by pressing “SHIFT + F8” you can simply access the the Safe Mode option within Windows 8.

Previously in Windows 7, if you move your mouse to the right end of the taskbar, you could see the preview of the desktop. Now in Windows 8, 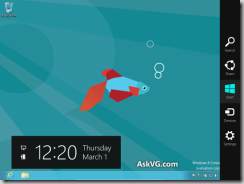 There are a few very useful hotkeys introduced in Windows 8 which can make your Windows 8 experience better. Some of them are given below: