Databases form the core of MS Access system which include cells, rows, tables and other miscellaneous elements. But once these databases go corrupt several things can happen – internal and external of Access. The database files generally have extensions ending in  *.ac–b,*.mdb, *.adp, *.mda,*.ac–a,*.mde,*.ac–e,*.ade  which form the core group of Access. Enterprises use still bigger databases like SQL Server 2012, Oracle, DB2 which are generally used  to store customers credentials and other transaction related details.

The evidences of a corrupted database can range from

Several third-party utilities can repair Access databases like AccessFIX, But before you spend a few dollars it’s worthwhile to test the inbuilt repair functionality of Access software. Even in 2002, Compact and Repair utility was a useful tool for optimizing or repairing Microsoft Access database files.

How to TroubleShoot and repair a damaged Access 2013 database?

Microsoft Jet, the database engine used in MS Access 2002 is a file-sharing database system. But in Access 2013, Database Engine 2013 Redistributable is the backbone. Though Microsoft offers free runtime versions of Microsoft Access, just like Java-Run-Time, these are only for testing your data. If you prefer developing forms, queries, reports etc, you need a full version of Access 2013 or Access 365.

Let’s see some more reasons why the database files in MS Access get corrupt.

If a database file is shared over a network, and if multiple users work with the same file simultaneously there is a small possibility of the file become corrupt. The risk gets higher if user frequently edits data in Memo fields.  The main reason of corruption is with VBA modules.

First of all let’s try to troubleshoot an Access 2013 database supplied by AccessFIX vendors. The test database name is “Test Database (minimal damage).ac–b”. I tried to open this database using Access 2013. Then this error cropped up.

Since it prompted me to take a backup, I tried to search Google on how to take a backup for a Access database. Then I found this article. (http://office.microsoft.com/en-001/access-help/help-prevent-and-correct-database-file-problems-by-using-compact-and-repair-HA010235583.aspx).

Why do you need a Backup?

During the repair process, Access may cut-off some data from tables that are damaged. So in case, if something inadvertent happens, it’s possible that you can recover that data after the repair process is complete. The backup can be taken using the “Back Up Database” command. But not only for this unexpected happening, its beneficial that you do a regular backup of your Access database.

You can use any of the cloud storage services like DropBox, Bitcasa, Box, Google Drive, SkyDrive etc to sync your database online. Otherwise, using the built-in function of Access, you can take a backup on another location or hard-drive of your computer. 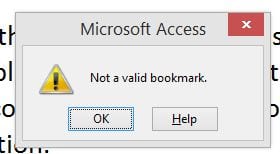 Since the compact and repair operation was incomplete, I had to resort to this third-party tool by Cimaware, which envisages that it can recover damaged Microsoft Access database files including modules, forms and field properties.

First you need to select the corrupted access file, using the “Select File” button. Then click on “Recover” button. After a few seconds, the recovery complete dialog box opens and there is a “View” button. The summary of the recovery shows that, there are

The View list shows the tables, queries etc. Finally you can save the database file. The recovered Access file will have an “AccessFIX” tag at the end of the file name. When I opened the recovered file in Access 2013, it successfully opened. So this gives a glimpse of the power of AccessFIX. 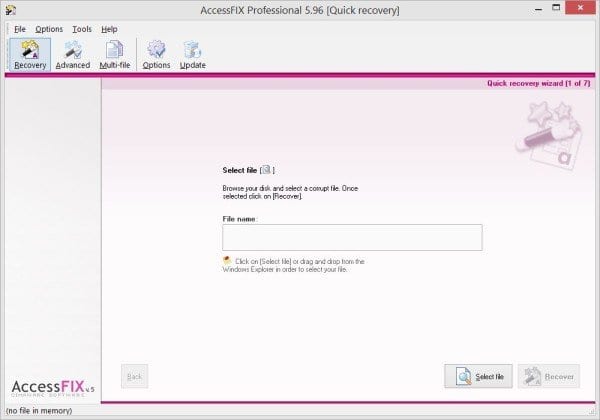 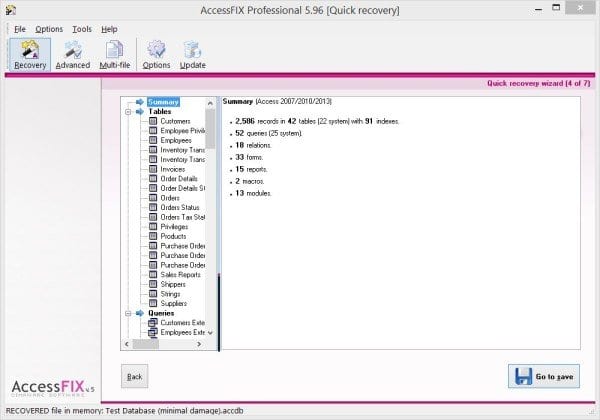 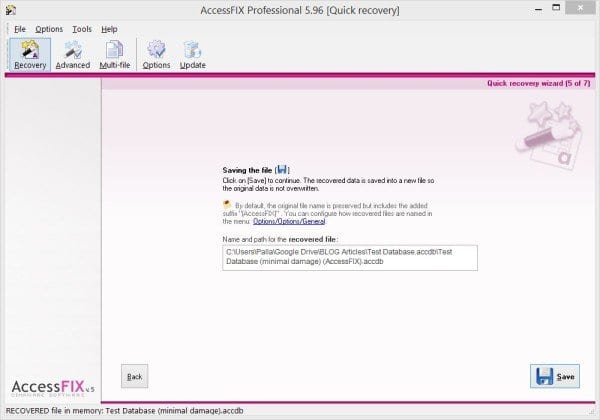 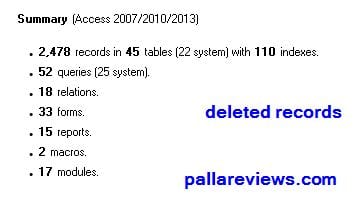 The results can be seen above. The amount of time taken to recover the deleted records and tables was less than 1 minute. The “NorthWind” database which was taken for experimental purpose was sufficiently large and could testify for the performance of AccessFIX.

The only other drawback I found in this product was that it didn’t name the recovered tables which were supposedly to have the same name, after deletion and recovery.