Days are for cloud computing. Several cloud storage services like DropBox, Google Drive, Apple iCloud, Microsoft OneDrive etc exist which provide features which are different to each other. Now we are going to do a rave review that tries to compare two popular services –  iCloud and OneDrive (previously known as SkyDrive). 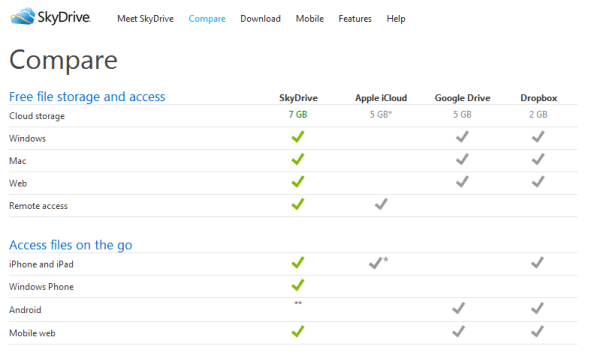 In this section we are going to see how much cloud storage each service is going to provide and the type of access to this storage. OneDrive Basic provides free 5GB storage while iCloud provides the same. But the disadvantage with Apple service is that it works well with iPhone and Mac. To store iWork documents on the cloud you need iWork apps.

Though I don’t have a Mac to check this difference, I really like OneDrive (SkyDrive) for its usability to store different documents without much fuss. (Ya, I’m a Windows user). Coming to accessibility, OneDrive works with both Mac and Windows.

iCloud is just a Mac thing. OneDrive can be accessed using a browser. But that’s not possible with iCloud. I presume that you need an Apple Account to store files in iCloud. But both services provide remote access.

Accessibility from SmartPhones and Devices

Apple cloud storage can be accessed from iPhone and iPad only. OneDrive is versatile in this regard that it can be accessed from Apple devices, Windows Phone, Android and even Mobile Web. In Windows 10 or 8.1 or 7, you get this software app by default. You just need a Microsoft account to use it. This comes handy, as it is more compatible with the Windows 10 user account.

But for iCloud, you need to create a separate account and will have some syncing problems. The following is an issue as mentioned on the Microsoft support page.

Apple has identified an incompatibility with iCloud for Windows (version 7.7.0.27) where users may experience issues updating or synching Shared Albums after updating to Windows 10, version 1809.

Now if you have Office documents in the cloud, you can work with them across PC, Mac and the web. Whether the same thing works with iWork documents can only be told by a Mac user. The feature that I like is you can edit your documents and notes simultaneously and work as a group using OneDrive and iCloud services.

Another important feature that both services provide is version control. You can track different versions and go back to an older version when you need.

While you are on the go, you can capture or write anything using note apps. This can be later transferred to your main system or computer when you are back home. Free apps are provided for smartphones to incorporate this feature. EverNote kind of app may be available for phone users.

Online slideshows, Captions and showing Geotags for images and photos are supported in both the services. But what Microsoft boasts about its service is that we can even email slideshows and post these images to Facebook and Twitter.

You can share with anyone your OneDrive files.  Also, just like Google docs you can view your Office files online. The maximum file size supported in OneDrive is 2 GB. While in iCloud case, its 25 MB for a free user and 250 MB for a paid user.

In addition to the free storage provided by both the services, there are paid options. 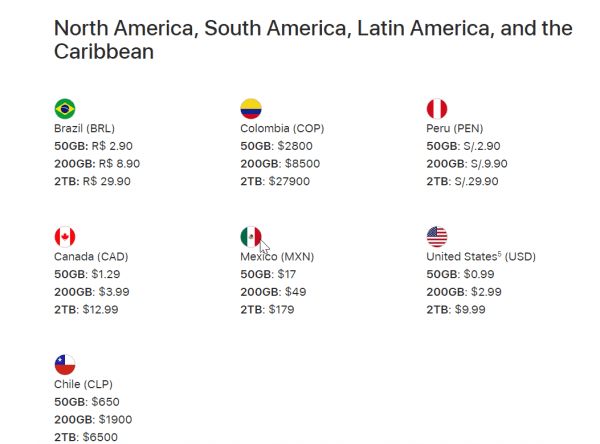 But Microsoft has different plans and pricing for OneDrive.

For personal use, you can get 50GB for $1.99/month. But there are no other plans for higher storage. If you want higher storage plans, you need to pay $69.99/year. This will provide 1 TB storage.

But there is a catch.

I think OneDrive is highly priced here and not consistent with user needs.

Some comments on “ComputerWorld” are little eye opening in the fiasco between OneDrive and iCloud. OneDrive for Mac (probably the client version) stops working on re-booting and you need to re-install the package. Many have still not upgraded OSX 10.6 and if Microsoft supports it, that can be negative vote in the competition. On the other side, Live.com tries to get at the contacts using the “share” features.

But the positive aspect of OneDrive is that it is available on mainland China where big players like DropBox, Google, Box are blocked.

The biggest plus comes in the arena of MSOffice 2010. OneDrive is integrated using the “Save & Share” interface. But the “sync” part is totally messed up as in-numerous number of versions are created when you upload an Office document.

From the above review, its possible to say that OneDrive is meritorious over iCloud in most of the attributes, but still may not be the outright winner among cloud services.

1 thought on “Why OneDrive, Not iCloud ? Feature Comparison and Review”