After the 1809 update of Windows 10 also, Google Chrome continues to use high CPU resources. The latest 64 bit version is 70.0.3538.67 which is the official build. You may expect that, looking into the Task Manager would give you an idea of how much CPU percentage Chrome is using.

But after 1809 update of Windows 10, you see that Chrome only uses 1 to 2% CPU, though the total CPU resource is as high as 90%. When you close Chrome, you can see the drop to 14 to 30%. Though it lot depends on the Processor type and hard-disk, it is still to be feared that 90 to 95% CPU resource are going to hog your system.

If you are playing a game, then this has a serious impact. Though you cannot do much towards high RAM usage, as it depends on the site resources and number of tabs. But you can definitely reduce the amount of CPU usage with a few little tweaks. 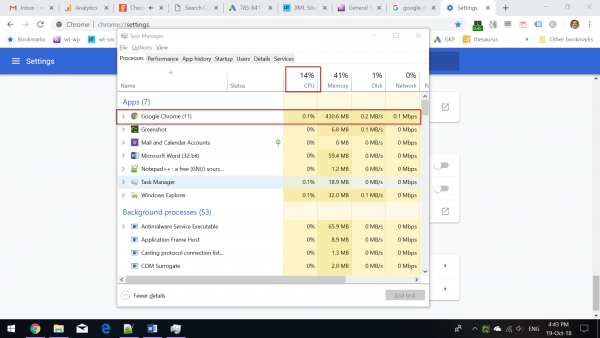 How to Lower Google Chrome High CPU Usage in Windows 10 after the October 2018 update?

Go to Settings, by clicking the 3 dots on the top right-hand side. Scroll through, until you see Advanced. Click the drop-down arrow. Scroll down to “System”. Disable these two options, by moving the slider.

Related :  How to Create Local Administrator Account in Windows 10 Home

What is my Experience?

I never thought that Google Chrome being the best browser and having around 65% share of browser market is going to take so much of CPU usage time. But when I was resolving another error, I stumbled onto this issue.

Also we have some background apps running, which do not take up much of RAM and CPU time. Though my Memory usage is around 43%, my CPU usage shuffles between 10 to 40%.