Issue 1 :  Second monitor video not playing smoothly when full screen games are played on first monitor. The second monitor lags and delays heavily. You can see a script of this issue in this quote here :

AMD Gigabyte HD6870, When i run full screen games on my main monitor, my secondary monitor will not play video smoothly; Windowed, or fullscreen. Didn’t happen in win7 64, it’s not an issue of the graphics card keeping up or anything like that. It happens in Netflix and MPC-HC and WMP. With and without FFDShow and other codecs installed. Happened with the two previous versions of windows 8 also.

There was another user on overclock.net forums, who seems to have the same kind of problem.

i can confirm I have the same exact problem with win8 64bit with my nvidia gtx 670 using the latest nvidia driver…. its a windows 8 problem…

This is basically because of the design safety in Windows 8. In order to save power for battery powered units Windows 8 designers put a cap on the framerate of Windows running in “background” with full screen applications.

Issue 2 : If we run a full screen programme/game on the first monitor, the FPS on the second monitor drops under 10. The problem occurs even if you have latest video card drivers and latest Win 8 chipset driver from your computer brand manufacturer. Some people are getting this issue who are using graphic drivers related to ATI and Nvidia.

Solution : This issue can be solved if you first load the media player or video first and set its priority to above “normal” or higher under Task Manager. Later you can play the game under full screen but in “Window” mode.

If you still want to play the game in full screen, you can try “Compatibility” mode in Windows 7.

Issue 3: Microsoft basic drivers do not have HDMI support and there seems to be an issue if you want to run dual monitor using Intel HD2000/3000.

Solution : You can install the following second generation drivers. The following are the links to Windows 8 Beta drivers.

The best solution is to use the drivers from eightforums.com. Driver version 64_8.15.10.2476_PV on build 7989 worked perfectly for a forum member using 64-bit version. There is also a 32bit version mentioned in the forum. 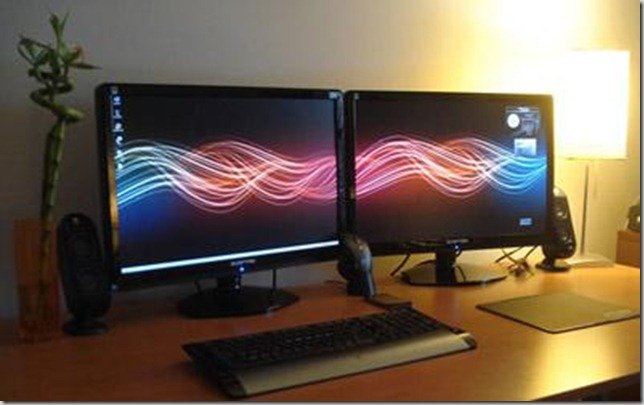 One of the earlier issues when you try to upgrade from Windows 7 to Windows 8 would be that of dual monitors. In the earlier versions of Windows 8 i.e Consumer Preview and Developer preview, same display is shown on both the monitors. The solution to such problem is to find the right Windows 8 drivers to fix the problem. In case you are having problem installing Windows 8 drivers, the alternative is to install them in Compatibility mode.

You can follow the following steps to remedy such kind of issue.

This should initiate the Windows 8 drivers installation procedure.

Get this book on Windows 8 Hacks for as low as $13.18 on Amazon. The Kindle edition is still lower.

The above are some of the Windows 8 dual monitor issues commonly faced by users. I’m sorry I couldn’t give details of the versions of Windows 8 in which these problems arose, but are more likely to be corrected in the final release version of Windows 8.