Kaspersky Internet Security 2013 Beta offers a wide range of security solutions and being one of the new-trends of Kaspersky Labs of products,  contemplates to be a multi-tiered protection of personal computers and laptops. The new features of Kaspersky Anti-Virus 2013, which is still in development stage include – -System Watcher -Malware Search -Safe Desktop -Enhanced Rescue Disk -Smart Installer Mode

If you are on Windows 8, you can install the “Kaspersky Now” app. Kaspersky Now displays your PC’s protection status (threats, database, license, and recommended actions) and also lets you quickly launch Kaspersky Antivirus and Kaspersky Internet Security features. For further information visit this link. 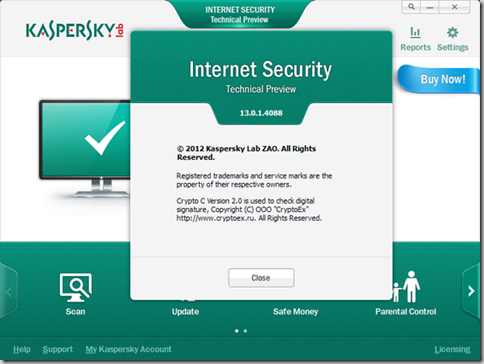 Disclaimer : The above software are still in beta stage and the responsibility of its use completely lies with you. 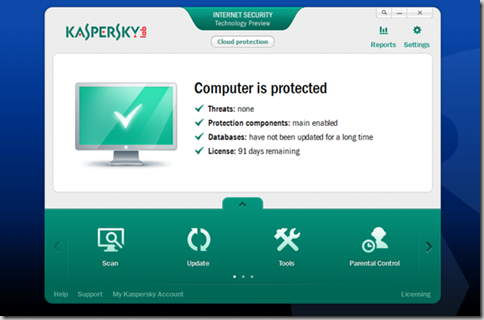 Safe Money Technology Kaspersky 2013 is offering more advantages than its predecessor 2012, when coming to online protection and malware removal. Taking into account of the recent changes in online cyber activity and criminals mindset, Kaspersky has come up with Safe Money technology to prevent online fraud. This technology is useful if you are a frequent user of credit cards online and internet banking. The concept behind this technology is to isolate browser related businesses and make them safe. This includes checking the authenticity of a commercial website online store.  Safe Money technology uses on-screen Virtual Keyboard to enter the password and credit card number without holding the keyboard, which makes key-logging malware almost impossible. The 2013 line of products are intelligent enough, that it provides an improved anti-phishing engine with its renowned ability to detect phishing sites by analyzing their content in real-time. Safe Money mechanism can also guard against fraud by checking the reputation of site certificates. This feature which was formerly known as Safe Run for websites is now part of Safe Money. When consumers enter a financial web site, Kaspersky will put the browser in high-safe mode, making the security highly impossible to decipher. The users can also choose this high-security mode manually also. Automatic Exploit Prevention Kaspersky added another tool in its armory, which that can block even the most recent malware/virus exploits unknown to-date. Malware exploit vulnerabilities are also taken care-of using this technology. At the recent Kaspersky Reviewers Roundup in San Francisco, Oleg Ishanov, Kaspersky’s Director of Malware Research listed the steps required for an exploit to succeed.

Related :  OneDrive vs Google Drive vs IDrive - Comparison of features in 2019

Automatic Exploit Prevention works in such a way that it can stop the malware exploit at various steps. The 2013 line of products adds a new technology called “forced ASLR” (Address Space Layout Randomization). This new technology is already present in Mac OS and iOS and to some extent in Windows. This method of defense relocated modules in memory, making it tough for the exploit to execute in step 2 above. This even works in Windows XP. Another advantage of the same is that it lays emphasis on process execution control, preventing the payload to launch in step 4 above. According to Kaspersky’s internal lab test results, this mechanism can block 100% of exploits made to computer systems on the basis of BlackHole exploit kit. Kaspersky 2013 based products are still in beta stage and the release date is expected to be in Aug, 2012. The latest version is 13.0.1.4107 to the date of writing this post. Let us know in your comments your experience with Kaspersky 2013 products and your interest in purchasing it.

Facebook security settings determine the protection of your account. Secure log-in is what many non-techy users prefer! Social media can be beneficial and bane at the same time. Facebook is…

WonderFox is an 11-year-old company that specializes in various software for DVD and Video converters. In 2021, Wi-Fi, Bluetooth, Wireless adapters have taken over the world with support from different…

2-factor authentication requires a third-party authenticator for Facebook. It provides additional security to Log-in in addition to username and password. Unfortunately, in 2021, Facebook log-in credentials are easy to crack….

Windows 10 spotlight is an attractive feature on the lock screen. In addition, Bing wallpaper sets the desktop background apart. In the same way, new and changing images make this…

Google Photos is a web and mobile app that can store pictures and videos of your family. To use this application Google account required. A shared library is part of…

After June 1st, your Google photos storage is going to count towards Google Account storage. Previously you could upload an unlimited number of photos in High-quality Resolution. It is to…